Before sitting down with family and friends to feast and give thanks this week, get a crash course in fun facts and history of Thanksgiving and our favorite holiday bird 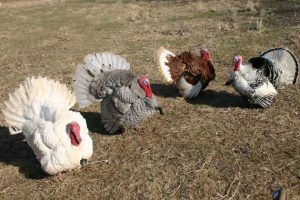 Several varieties of turkeys live in America. The largest is the Bronze turkey. The adult male or tom weighs up to 50 pounds.

In England, during the 1700’s, turkeys were walked to market in large herds. Turkey farmers often covered the birds’ feet with little booties to protect them on the long journey to the London market. Head ‘em up, move ‘em out.

Ben Franklin thought the North American wild turkey should be the national bird. Of course, the turkey of his day was nothing like the domesticated descendants we know today. The wild turkey of Ben Franklin’s day was a brightly plumed, cunning bird of flight.

Unlike eagles, turkeys live in flocks. Imagine seeing a flock of birds as large as turkeys flying across the sky. It must have been a wondrous sight. Wild turkeys have longer necks and legs as well as smaller breasts than turkeys bred for the table. The true American turkey was “wild and wary to the point of genius,” said author G. T. Klein.

Too Big to Breed

The most prized portion of the turkey is the white meat of the breast. Because Americans like white meat so much, turkeys are bred to produce large breasts. Our domesticated turkeys have such large chests that the male, “tom turkey” is not able to fertilize the eggs of the female, “hen turkeys” in the natural mating position. Today, turkey eggs are fertilized by artificial insemination for the hatchery.

The head and neck of turkeys have no feathers; rather it is covered with red, fleshy skin. A soft floppy growth on the front of the head, which dangles downward over the beak, is called the snood or dewbill. The turkey also has a pouch-like area at the front of his throat which is called a wattle. The head, neck, snood and wattle are all reddish colored until the male turkey begins to do his “strut” or mating dance at which time the entire area turns brilliantly bright red.

Did you ever wonder why the breast and wings of chickens and turkeys have white meat while the legs and thighs are dark? The explanation is a physiological one involving the function of muscles, which gives some insight into humans as well as animals. The dark coloration is not due to the amount of blood in muscles but rather to a specific muscle type and its ability to store oxygen.

In pictures and drawings, the male turkey is usually shown in his proudest moment. For those of you who have not seen a real turkey, the puffed-up picture is the male turkey and this is not his usual stance. This feather works display only lasts for a few minutes but it can be seen several times daily. 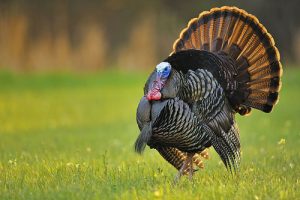 Biologists know of two kinds of wild turkey. One is native to Yucatan and Guatemala. The other is the wild turkey common to Mexico and the United States.

The male turkey in full plumage is dignified and almost royal in appearance. As his dance begins, the body stiffens and he gobbles loudly holding his head high, piercing black eyes looking straight ahead. His huge chest is thrust forward. Each feather stands apart with his tail feathers fanned. His wings drape down and drag the ground as he stamps his spurred feet. Moving in a circle around the barnyard for all to see. For a few glorious minutes each day, he is the finest, most magnificent animal on the farm.

The tom turkey does this number to attract the attention of the female, of course, who never seems to look directly at him. When he is not “strutting” about, the tom turkey looks much like the hen, only larger. As for strutting his stuff, no one and nothing does it better than the proud, adult tom turkey.

How the Turkey Got Its Name

There are several possibilities on why turkeys are called turkeys. Some say Columbus thought the land he discovered was connected to India which had a large population of peacocks. Columbus thought turkeys were part of the peacock family. He decided to call them tuka, which is the word for peacock in the language of India.

Others say that the name turkey came from Native Americans who called the birds firkee, which sounds like turkey.

Some say that turkey name came from the sound turkeys make when they are afraid – “turk, turk, turk.”

Charles Dickens “A Christmas Carol” is credited for popularizing the serving of turkey for Christmas dinner.

After the first Thanksgiving in 1621, it took over 200 years before Thanksgiving Day was officially proclaimed as a national day of thanksgiving, praise and prayer in 1863.

Franklin Roosevelt changed Thanksgiving one year to a week earlier than usual in 1939 to make the Christmas shopping season longer. There was a tremendous outpouring of public disapproval so, in 1941 Thanksgiving was declared a legal holiday by Congress.

The “turkey trot” was a dance made popular in the early 1900’s. Conservative members of society thought the dance was demoralizing and tried to get it banned at public function, which only served to increase its popularity. The turkey trot was not a graceful dance, as couples danced around in circles bobbing their heads like strutting tom turkeys. Alas, it was soon replaced by the ever so popular “Fox Trot” in 1914.

Although wild turkeys like to rest in trees at night, they build crude nests of dry leaves on the ground. Turkey eggs are almost twice as large as ordinary chicken eggs. They have a pale creamy-tan color, with dark brown speckles. The huge yolk is golden-orange in color. Fertile turkey eggs take 28 days to hatch.

Biologists know of two kinds of wild turkey. One is called the ocellated turkey, which is native to Yucatan and Guatemala. It is a brilliantly colored bird with eyelet spots on its tail like a peacock. The other is the wild turkey common to Mexico and the United States. At one time this wild turkey migrated as far north as Maine and southern Ontario, Canada.

Which came first—the Pilgrim or the turkey?

Wild turkeys were probably first domesticated by native Mexicans. Spaniards brought tame Mexican turkeys to Europe in 1519, and they reached England by 1524. The Pilgrims brought several turkeys to America on the voyage in 1620.
http://www.historychannel.com/exhibits/thanksgiving/main.html
Find out what the Pilgrims really ate at the first Thanksgiving dinner

Several varieties of turkeys live in America. The largest is the Bronze turkey. The adult male or tom weighs up to 50 pounds while the female or hen can weigh up to 16 pounds. These larger turkeys are still popular for use in restaurants but are too large for even the most well attended family gathering. 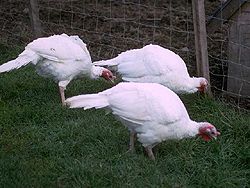 Turkeys will peck at just about anything, including each other.

Turkeys are extremely curious creatures by nature. Groups of domesticated turkeys have been seen standing in the rain with their beaks pointed straight up toward the sky. What are they doing?

According to poultry research at the University of Illinois, it is unclear. Some turkey experts speculate that these birds are curiously looking at raindrops falling from the sky. Or could they be attempting to get a drink of water? We are still not sure.

An old wives’ tale suggests that turkeys have been known to drown in this position. While this has not been substantiated at the University of Illinois, we do know that without guidance, some domestic turkeys do not know enough to come in out of the rain.

If they are young and still covered with down instead of their true feathers, they are much more likely to suffer from exposure than from drowning. Not having enough sense to come in out of the rain may be an understatement in this situation.

Turkeys will peck at just about anything, including each other.

Courtesy of the University of Illinois Extension

— Gobble up these facts about turkeys  —-