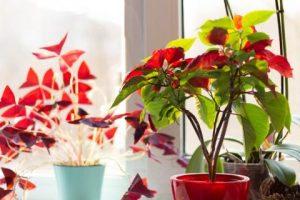 With their varying shades of cheery colors, poinsettias are the bestselling potted plant in the United States and Canada. (Photo courtesy of University of Illinois Extension)

With their varying shades of cheery colors, poinsettias are the bestselling potted plant in the United States and Canada.

When it comes to the most popular holiday plant, the winner is surprising. With their varying shades of cheery colors, poinsettias are the best-selling potted plant in the United States and Canada.

There are more than 100 varieties of poinsettia, from the traditional red plants to pink, white, yellow, and purple. If taken care of properly, their bright displays can last for several weeks, says Ken Johnson, University of Illinois Extension horticulture educator.

The greenish-yellow flowers, cyathia, are in the center of the bracts. poinsettias will drop their bracts and leaves once their flowers have shed all their pollen. So, for long-lasting poinsettias, choose plants that have little or no pollen showing in their flowers.

One of the most long-standing myths about poinsettias is its toxicity.

“Contrary to popular belief, poinsettias are not poisonous,” Johnson says. “The misconception began in 1919, when a child allegedly died after eating a poinsettia leaf.”

While this was never proved, and was later determined to be hearsay, the story has persisted. In fact, a study by Ohio State University showed that a 50-pound child would have to eat more than 1¼ pounds of the plant, 500 to 600 leaves, to have any harmful effects.

That being said, poinsettias may ooze a milky sap and some people that have latex allergies may have a reaction to it. This may also cause mild irritation and nausea in pets, so it may be best to keep them away.

Poinsettias are sensitive to extreme temperatures. Cold temperatures can damage the bracts and leaves. Keep them wrapped when transporting them outside.

Poinsettias come wrapped in foil and plastic. If left on, be sure to poke holes in the bottom so water can drain out. Water poinsettias when the soil becomes dry and discard the excess. Waterlogged plants can get root rot and die.

After the holidays, fertilize poinsettias once a month after they are done blooming.