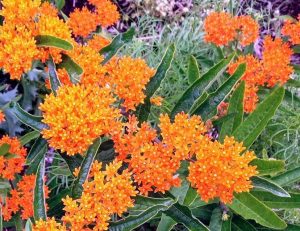 Invasive plant species in our natural areas can wreak havoc for wildlife.

These invasive plants can reduce nesting sites or add confusion for birds causing them to nest too early, reduce insect and pollinator food and habitat and drastically reduce native plant populations.

Invasive plants outcompete the native vegetation by leafing out earlier shading germinating seeds, being adaptable to a multitude of growing conditions or being prolific seeders. These invasive plants are usually from a different part of the world and introduced as an ornamental landscape plant in the industry.

Unless you keep up with this environmental concern, growers and gardeners alike may be unknowingly planting these plants in their yards.

However, there are native plant alternatives that will give you the same impressive display as some of these invasive plants commonly sold in the industry.

Burning bush (Euonymous alatus) forms dense thickets in the understory and displaces native plants, while Blackhaw viburnum (Viburnum prunifolium) grows taller than Burning bush but has shiny to dull red fall color, attractive white blooms in April followed by colorful drupes. Caterpillars of the Spring Azure butterfly will sometimes feed on the flowers and the buds.

Barberry (Berberis thunbergii) is rapidly spread by birds and leaf out in early spring causing it to shade the native plants, while Black chokeberry (Aronia melanocarpa) blooms in late spring, produces numerous black leathery fruits and the glossy green leaves equates to outstanding fall color, all while supporting bees and birds.

English ivy (Hedera helix), aggressively climbs up trees eventually killing them and covering the ground floor choking out all that is in its path. It is also an alternative host to Bacterial leaf scorch, which affects a wide variety of trees. Instead, plant Virginia creeper (Parthenocissus quinquefolia); a woody vine that turns scarlet red or burgundy with blue-violet berries in the fall.

Winter creeper (Euonymus fortune) is vigorous invader accepting many growing conditions, which has made it a go-to-ground cover in the industry. Use Barren strawberry (Waldstenia fragarioides) that is evergreen in mild winters, produces yellow blooms in spring, followed by small strawberry looking inedible achenes. It also adapts to a wide range of soils.

Butterfly bush (Buddleja species) is a species of concern, as it is a prolific invader of the Northeast and Pacific Northwest. They form dense thickets that are hard to remove and supplant other native plants as nectar sources reducing pollination. Instead, plant butterfly weed (Asclepias tuberosa). It blooms in the summer on a two-foot-tall plant, is the larval source for monarch caterpillars, and its nectar supports multiple species of bees, flies, wasps, beetles, and butterflies.

For more information on this program or additional Extension programming,  visit online at go.illinois.edu/LMW or contact us at your local Extension office at 309-663-8306.