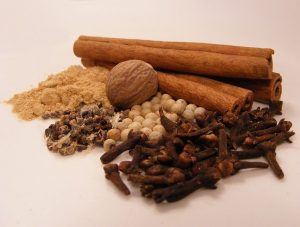 The scents and tastes of cinnamon, nutmeg and allspice are long associated with the Christmas holiday season.

The sugar we use comes from two different plants: sugar beets or sugarcane. Worldwide, 70 percent of our sugar comes from sugarcane. Sugarcane is a tall grass that grows in tropical areas.

In a tropical setting like Hawaii and Jamaica, it grows in fields and looks similar to corn.

To get sugar from sugarcane, the cane is pressed to extract the juice, then boiled, and spun to produce raw sugar and syrup (molasses). The raw sugar is then sent to a refinery where it is washed and filtered to remove remaining non-sugar ingredients and color. It is then crystallized, dried and packaged into refined (or granulated) sugar.

Most of the sugar we eat here probably came from sugar beets. Sugar beets are a root crop resembling a large parsnip grown mostly in the temperate zones of the north.

Beet sugar processing is like sugarcane, but it is done in one continuous process without the raw sugar stage. The sugar beets are washed, sliced, and soaked in hot water to separate the sugar-containing juice from the beet fiber.

The sugar-laden juice is purified, filtered, concentrated and dried in a series of steps similar to cane sugar processing.

Most of our spices are native to the tropics, and many come from trees. If you’ve ever been on a trip to the Caribbean, you’ve probably seen the plants that produce our allspice, cinnamon, ginger, and nutmeg.

Allspice, grown on the pimento tree (Pimenta dioica), is a dried berry native to Jamaica that tastes like a combination of nutmeg, cinnamon, and cloves.

Cinnamon comes from the inner bark of tropical cinnamon trees (Cinnamomum zeylanicum). These are small trees that grow about 30 feet tall that are native to southwest India.

Nutmeg (Myristica fragrans) trees are the only tropical fruit that is the source of two different spices, obtained from different parts of the plant. Nutmeg is the seed of the tree’s fruit, and mace is the seed’s veil-like covering.

Ginger is an herbaceous perennial plant with a beautiful flower. It has a knobby, bumpy root with a peppery yet slightly sweet flavor. The tropical spice ginger (Zingiber officinale) is different from our native ginger (Asarum canadense).

The next time you eat “sugar and spice and everything nice,” think of our tropical friends that produce these crops.

— The origins of sugar-n-spices that make holidays special —-