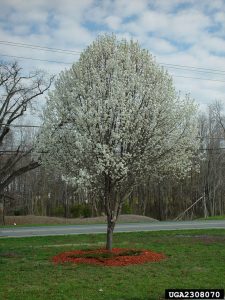 Callery Pear tree is popular for its spring blooms, but its shape makes it prone for branches to break during tough weather circumstances. (Photo Nebraska University Extension)

In recent years, one of the most popular trees planted in yards and by cities has been Callery Pear.  These trees are cultivars of the Bradford Pear (Pyrus calleryana).

They cannot self-pollinate, so it was thought this would be a good thing, preventing the rapid spread of these trees.  This was meant to prevent them from becoming a problem like some of the other trees and shrubs that have been planted in the recent past.

The big draw to this tree is that it produces a beautiful flower in the spring; it is relatively fast growing; and has a very desirable shape.  One of the biggest problems is its shape.  The branches have a tendency to crack and break off in high winds, snow, and ice.  This causes a problem as it damages the tree and can be a health and safety issue.

The real problem that has become apparent in recent years is that though the individual cultivars cannot self-pollinate and produce a viable fruit they do readily cross with the Asian Pear.  This produces a hybrid that is able to produce a viable fruit.  This has facilitated the rapid spread of these trees into areas where they are not wanted.  If you have noticed in the early spring (April and May), there is a large number of white trees along the highways and along the edges of forested areas.  That is the Callery Pear trees.  In addition to the hybridization, these cultivars are grafted cultivars.

The weakness of the tree makes it very vulnerable in the winters that can be very harsh in Illinois.  If the tree is damaged and the top is “killed”, the root stock is capable of sprouting and producing a plant that will be able to of producing viable fruit.  This allows the tree to spread just like the hybrid does.

Callery Pears are easy to identify. They are a medium-sized tree and are the largest of the cultivars reaching up to 60 feet in ideal conditions.  Though this does not often happen, as they tend to weaken and break before they achieve their full potential height.

Flowers appear in the early spring. They can be seen from about April to May and are very noticeable as they emerge before the leaves.  The flowers are small (up to one inch) and white.  Though the flowers are nice from a distance, they tend to not smell pleasant, often being described as rotten fish.  The leaves are simple, two to three inches long, shiny, and wavy with a toothed margin.  The fruit is small (about half an inch in diameter), round, and green to brown in color.

The invasive nature of these trees has led many cities to no longer plant them along right-of-ways and in parks and other city-owned properties.  The tree itself poses a threat to native areas, as it spreads aggressively and has the potential to crowd out more desirable species.

— The pluses, and minuses, of popular pear tree  —