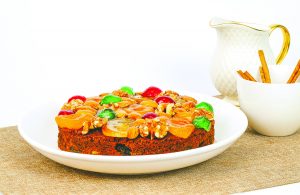 For a while, fruitcakes fell out of favor, but it seems that everything old is new again, because fruitcakes are making a comeback … as energy fuel for hikers! (Depositphotos)

My mother made a fruitcake every Christmas to give as a gift for my paternal grandmother. The cake was stored in a corner of the refrigerator for weeks, marinating in an alcohol-infused mixture. Even though I’m well-known for my love of sweets, that green and red candied fruit-studded, boozy brown confection never tempted me.

For a while, fruitcakes fell out of favor, but it seems that everything old is new again, because fruitcakes are making a comeback … as energy fuel for hikers!

“You’ve got a perfect food for a hiker who’s trying to go the distance,” said Brenda Braaten, a nutritionist who also bakes fruitcakes and owns Little Haven Hiker Services in Belden, California. “You’re close to the same calories per gram in a fruitcake compared to a Snickers bar or a trail bar, but you’re miles ahead on iron, magnesium, calcium,” she said. “The mineral content is higher.”

Old fashioned as they are though, Christmas cakes are for those of us who love the traditional foods of the holidays every bit as much as the newly invented confections. And while it’s true that some fruit cakes are hard to love, others are a glamorous and — yes — delicious offering that reflects cherished customs and flavors that have been passed down for generations.

The first Christmas cakes were created in Britain and began life as something else entirely. Around the 16th century, during the early days of Christmas, a porridge was made to which dried fruits were added. By the 1800s, with the availability of flour, eggs and sugar, that simple cereal treat transformed into something more sophisticated. Over time, bakers spun the recipes into light and dark cakes, full of dried and candied fruit, or versions containing only nuts.

France’s interpretation of a Christmas cake was a fussy, beautiful Buche de Noel. The recipe differed from tradition because it didn’t contain fruit. Instead, a sponge cake filled with chocolate buttercream was rolled to look like a Yuletide log. It is still a scrumptious showstopper today.

In America, we have continued making these heritage recipes and added a few of our own. There is nothing that says holidays more than a striking Red Velvet Cake, or a Southern Lane Cake filled with candied fruit sandwiched between light fluffy layers of white cake, or a moist Apple Cake heady with spice, or your favorite variety of Coconut Cake

A cake at Christmas is a treat worthy of the holiday, whether it’s an antique fruitcake recipe like the one created by Brenda Braaten, or more modern treats. Nothing says “celebration” like a slice of Christmas cake, the perfect holiday indulgence!