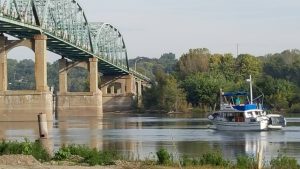 The pandemic has sabotaged many vacation plans and will likely impact leisure plans going deep into the fall.

Trips that involve air travel and longer stays are being canceled either by personal choice or by closures due to COVID-19.

A side effect is the revival of the old-fashioned car trip. Families and individuals are looking for day trips (or weekends) away home, away from the screens and for a distraction from the pandemic news.

Illinois’ river roads provide opportunities to just unwind and take in scenery around us or to get out, stretch the legs and explore a community or an historic site along the way. 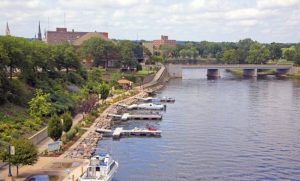 The Illinois River travels 273 miles through the heart of the state before joining with the Mississippi River about 14 miles from Alton. The river forms at the junction of the Kankakee and Des Plaines rivers in Chicago’s southwest suburbs in Will County.

The slow-moving river is used both for recreation and commerce.

A drive along the Illinois River is a drive through the heartland or central region of the state and along the way one can visit many natural landmarks along with historic markers and towns.

The byway’s website (www.illinoisriverroad.org) offers different routes or destinations to choose depending on how much time travelers have.

The landscape is varied with prairies, wetlands, forests and some of the state’s most popular state parks and historic Abraham Lincoln sites. There are 17 communities along the Illinois River Road Byway, and each town showcases its unique shops, landmarks, and dining. 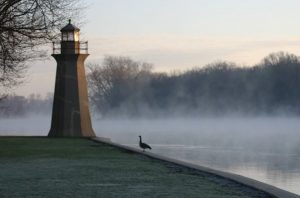 The Fabyan Forest Preserve in Geneva is a popular, spacious park right along the Fox River in Geneva. (Photo courtesy of Geneva Chamber of Commerce)

The Fox River has its beginnings in our northern neighbor — its source is in Waukesha, Wisconsin — and flows south into Illinois, eventually reaching the confluence with the Illinois River in Ottawa.

The river flows for about 115 miles in Illinois and contains 13 dams and 15 major tributary streams, according to the Illinois Department of Natural Resources.

Upper river towns include Algonquin, Fox Lake, McHenry, Carpentersville among others and this northern area features the Chain O’Lakes region, where anglers, boaters and vacationers alike enjoy the various inlets and resorts for summer and early fall getaways.

The river then winds through the heart of cities like St. Charles, Aurora, Geneva and through Yorkville and then into LaSalle County. Bridges straddle the river through historic downtown shopping and dining areas and the region offers bike trails right along the riverfront.

The Fox River is primarily a recreational waterway and offers scenic, winding roads and public parks along the way, including Silver Springs State Park near Plano. 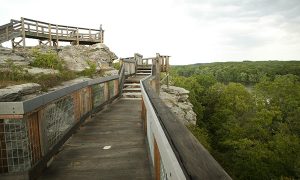 Castle Rock State Park is located along the west bank of the Rock River in Ogle County, three miles south of Oregon, on Illinois Route 2. (Photo courtesy of city of Oregon)

Like the Fox River, the Rock River begins in Wisconsin, just to the west of the village of Brandon in Fond du Lac County and flows into Illinois. It carves its way through 155 miles in northwestern Illinois on its way to linking with the Mississippi River at the Quad Cities on the Illinois and Iowa border.

The major cities along the Rock River are Rockford, Dixon, Sterling/Rock Falls, and Rock Island.

Dixon is the birthplace of President Ronald Reagan and features a unique bridge that runs right through downtown.

Rockford is the largest of the cities with shopping and dining in the downtown area along with many notable parks including Sinnissippi Park and Gardens, Levings Park and Davis Park at Founders Landing to name a few. Ogle County is known for two large state parks along the Rock River — Lowden and Castle Rock. 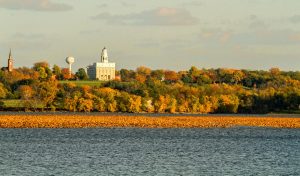 Historic Naovoo sits on a bluff along the Mississippi River and was an important stop along the river trade. (Photo courtesy of Beautiful Nauvoo Facebook)

The Mississippi River is the second longest river in the United States — second only to the Missouri — and it forms the western border of Illinois along the entire length of the state.

You can follow the 580-plus miles of the Mississippi River from East Dubuque down to Cairo on the Great River Road.

Some of the attractions on the northwest end are the Rock Island Arsenal Museum, the Army’s second oldest museum, Albany Indian Mounds State Historic Site, the 2,500-acre Palisades State Park and Galena.

As you get through the middle of the road, you come across historic river towns of Nauvoo, Elizabeth and Quincy and places that were key stops in the 19th century river trade. 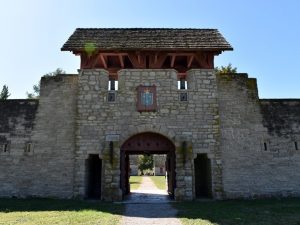 The Fort de Chartres State Historic Site, located in Prairie du Rocher, was a French settlement and it marks its 300th anniversary this year. (Photo courtesy of Friends of Fort de Chartres)

In the southwest region, the city of Alton, village of Godfrey, Chester are hidden gems with quaint downtowns and historic markers. Mary’s Covered Bridge is the only bridge of its kind left in Southern Illinois.

Fort de Chartres is an important settlement near Kaskaskia and dates back to the 1700s and the French explorers and the early settlers of this region of Illinois. And there is The Lewis and Clark State Historic Site in Hartford that is worth a visit.