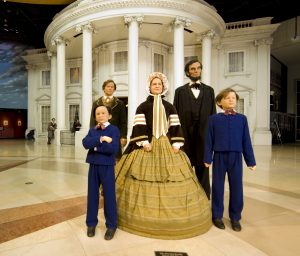 Wax models of the Lincoln Family pose in front of a replica White House inside the Abraham Lincoln Presidential Library and Museum. (www.enjoyillinois.com photo)

As Illinois cautiously reopens following COVID-19 shutdowns and quarantines, it’s once again possible to make a road trip to many of the state’s popular tourist and historic destinations

Springfield can’t wait to see you.

This summer’s Illinois State Fair and many entertainment events may be scuttled, but it’s still possible to walk in the steps of one of Illinois’ favorite sons — Abraham Lincoln.

Illinois’ state capital and surrounding Sangamon County is a living museum featuring the life and times of the man who was America’s 16th president and a legislator and attorney before that.

Arriving before noon leaves plenty of time to cover the top five Lincoln attractions as deemed by city tourism officials.

Make that six stops. The best place to start is the recently reopened Springfield Visitors Center at the Lincoln-Herndon Law Office, 1 S. Old State Capitol Plaza. Visitors can collect information, maps and have questions answered.  The office is open from 9 a.m.-5 p.m. and can also be reached at 217-789-2360 or www.visitspringfieldillinois.com.

Tourism officials remind visitors to practice social distancing and wear masks — practices already required at some of the sites. 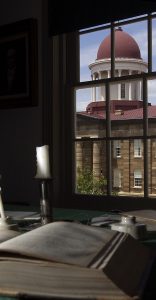 The old Illinois Capitol building is visible through the windows of the restored Lincoln-Herndon Law Offices in downtown Springfield. (www.enjoyillinois.com photo)

The crown jewel of any Lincoln trek opened in 2005. The 40,000-square-foot center claims to be among the most visited of all U.S. presidential libraries. The combination of galleries, theaters and historic displays offer an extensive collection of Lincoln lore. The center reopened on July 1 with new safety rules in place, including ticket purchase in advance, face coverings required and all guests tested for high temperatures. A handful of exhibits and displays remain closed. Tickets are available online (www.alplm.org) up to two weeks in advance or by calling 217-558-8844. Admission is $15 for adults, $12 for seniors, $10 for military (with ID), $6 for children ages 5-15 and $12 for students.

The interior and final resting place of Lincoln and family members is currently closed due to COVID-19 concerns. But grounds surrounding the tomb are open. Operated by the Illinois Historic Preservation Agency, the memorial features a 117-foot obelisk and a base with four bronze sculpture groups, each representing one of the four Civil War military services. Near the tomb’s entrance is a bronze Lincoln bust where visitors from around the world have stopped to rub the nose for good luck. Information: www.lincolntomb.com and Lincoln Tomb & War Memorials State Historic Site on Facebook.

The fully restored home — the only one owned by Lincoln — is the centerpiece of a four-block neighborhood restored to its mid-19th century appearance. Maintained by the National Park Service, the home is currently closed. But the surrounding 1860s neighborhood, with 12 restored homes dating back to Lincoln’s time, is open for self-guided tours. Information: 217-492-4241.

Illinois’ fifth capitol building is where Lincoln served as a state legislator and uttered the words “A house divided against itself cannot stand …” as the prospects for a Civil War grew. Built in the Greek Revival style between 1837–40, it operated as legislative and executive space between 1840-76. Now overseen  by the Illinois Department of Natural Resources, the building’s interior spaces remain closed. But the exterior grounds around the downtown location remain open. Former President Barack Obama — then an Illinois U.S. Senator — announced his candidacy for the nation’s top office on a frigid day in February 2007 in front of the old capitol.

Thousands of visitors to Abraham Lincoln’s tomb in Springfield have tested the belief that rubbing the nose of a Lincoln bust brings good luck. (visitspringfieldillinois.com photo)

Take a step back to the 1830s and learn what the village looked like when Lincoln lived there as a young adult (1831-37) and where he split rails, clerked in a store and served as postmaster. Reconstructed in the 1930s, visitors can learn more through limited interpretation and historic demonstrations. The Railsplitter Gift Shop, located near the parking lot, is open Thursday through Sunday. A visitor center and concessions are closed until further notice. Located 20 miles northwest of Springfield on Illinois Route 97. More information: www.lincolnsnewsalem.com.

Interested in staying a couple of days?  For a limited time, several Springfield hotels are offering an extra  night free with a two-night paid stay. The promotion covers Friday-Saturday through Sept. 30 and some week nights might also be available.  To book this offer, call the participating Springfield hotel and mention the Stay 2 Get 1 deal when reserving. For more information go to www.visitspringfieldillinois.com and click on the Stay link.