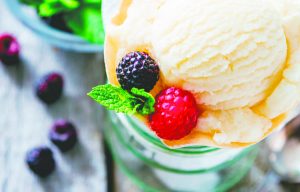 Try this wonderful ice-cream recipe, and beat the heat with a frozen treat! (American Egg Board photo)

It’s hot, and like many of you, one of my favorite ways to cool off is with a bowl of ice cream. Vanilla ice cream continues to be America’s flavor of choice. Ice cream’s origins are known to reach back as far as the second century B.C., although no specific date of origin or inventor has been indisputably credited with its discovery.

We know that Alexander the Great enjoyed snow and ice flavored with honey and nectar. Biblical references also show that King Solomon was fond of iced drinks during harvesting. During the Roman Empire, Emperor Nero (A.D. 54-86) frequently sent runners into the mountains for snow, which was then flavored with fruits and juices.

More than a thousand years later, Marco Polo returned to Italy from the Far East with a recipe that closely resembled what is now called sherbet. Historians estimate that this recipe evolved into ice cream sometime in the 16th century. England seems to have discovered ice cream at the same time, or perhaps even earlier, than the Italians. “Cream Ice,” as it was called, appeared regularly at the table of Charles I during the 17th century. It wasn’t until 1660 that ice cream was made available to the general public. The Sicilian Procopio introduced a recipe blending milk, cream, butter and eggs at Le Procope, the first and oldest cafe in Paris.

The first official account of ice cream in the New World comes from a letter written in 1744 by a guest of Maryland Governor William Bladen. Records kept by a Chatham Street, New York, merchant show that President George Washington spent approximately $200 for ice cream during the summer of 1790. President Thomas Jefferson’s slave chef, James Hemings, is said to have a favorite 18-step recipe for an ice-cream delicacy that resembled a modern-day Baked Alaska.

Wide availability of ice cream in the late 19th century led to new creations. In 1874, the American soda-fountain shop and the profession of the “soda jerk” emerged with the invention of the ice-cream soda. In response to religious criticism for eating “sinfully” rich ice-cream sodas on Sundays, ice-cream merchants left out the carbonated water and invented the ice-cream “Sunday” in the late 1890s. The name was eventually changed to “sundae” to remove any connection with the Sabbath.

Today, ice-cream machines make it easy for home cooks to prepare their favorite flavor of this delicious, frozen dessert. Try this wonderful ice-cream recipe, and beat the heat with a frozen treat!

Don’t let a favorite homemade ice cream using with raw eggs cramp your style with a possible food-borne illness. Substitute the traditional method with this cooked custard ice-cream recipe and variations from the American Egg Board.