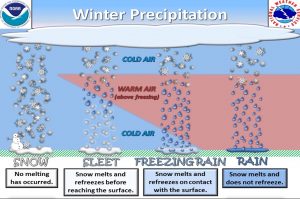 Most precipitation is forming thousands of feet above ground, where the temperature is much colder than at the surface. (Courtesy of National Weather Service)

Rain, snow, sleet, and freezing rain are all potential types of winter precipitation. Rain is liquid water, while the other three are frozen at the end of their atmospheric journey.

So, if snow, sleet, and freezing rain are all frozen water, what’s the difference?

The first thing to know is that no matter what type of precipitation we end up with at ground level, all precipitation in the middle latitudes starts out as snow. Remember that temperatures in general decrease with elevation.

Most precipitation is forming thousands of feet above ground, where the temperature is much colder than at the surface. Even in summer, snow can form in clouds. It only must fall through about 1,000 feet of above-freezing temperatures to melt, which happens easily in spring, summer, and fall.

Snow is made up of ice crystals that go directly from water vapor (gas) to solid (ice) with no liquid phase in between. Snowflakes can be considered minerals because they are solid, naturally occurring, crystalline, and non-organic.

For snow to form, ice crystals condense around a tiny particle in the air such as dust, smoke, or pollen. Condensing ice crystals form a prism with facets. Branching can begin, depending on weather conditions. More facets can form on branches. Both processes can occur at the same time.

There is an infinite number of ways ice crystals can form, and you have probably heard the saying “No two snowflakes are alike,” although considering the astronomically large number of snowflakes that have occurred over Earth’s history, there may have been a few in my opinion.

Can it be too cold to snow?

You may have also heard the saying “It’s too cold to snow.” Sorry, that’s not the case. Very cold air is often close to 100 percent relative humidity. Since cold air can’t hold much water vapor, whatever is present is close to its maximum capacity. This makes it possible for snow to form, it’s just that the flakes will be very small. Think about the polar regions. Those areas are much colder than we get here in Illinois, but they can still get snow occasionally.

Sleet is made up of ice pellets, not crystals. It also starts as snow but falls through a layer of air above freezing, where the snow melts and becomes rain. Near the ground, it travels through enough cold air to have the liquid water freeze. Sleet events typically don’t last long, as they are often associated with a nearby warm or cold frontal passage.

What is freezing rain?

Freezing rain occurs when the snow melts but doesn’t freeze before hitting Earth’s surface. It then freezes if the surface temperature is at or below freezing. Freezing rain events can last for many hours and cause widespread damage. The Easter Weekend freezing rain event in 1978 lasted several days, and some areas of Illinois were without power for almost two weeks due to the vast area of downed power lines.

The trend for warmer, wetter winters is projected to continue. This may mean less snow, but greater chances of rain and freezing rain events.

Duane Friend is the Illinois master naturalist coordinator and climate specialist with University of Illinois Extension, serving the organization in many roles since 1993.