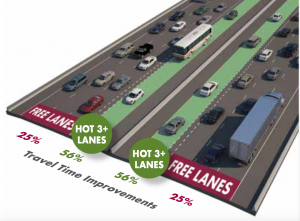 In the grading scale of national highways, the I-290 Eisenhower Expressway between Racine Street and Mannheim Road gets an “F” for heavy congestion, poor exit safety and outdated facilities.

The CTA Blue Line west between Chicago and Forest Park is also in poor repair, and stations are not ADA accessible. Both transportation modes were built in 1958, and both are in desperate need of an upgrade.

Even though there’s no guarantee that federal funding will match up to fix both transportation modes simultaneously, the Illinois Department of Transportation (IDOT) and Chicago Transit Authority (CTA) are working together to coordinate planning for both.

Traffic snarls on the “Ike” can stretch for miles, as four lanes constrict to three and left-side exits at Austin Boulevard and Harlem Avenue cause traffic confusion. Around 200,000 cars use the I-290 daily. Blue Line trains are routinely delayed by “slow zones.”

On Jan. 25 and 26, IDOT presented a final draft of its multi-year Environmental Impact Statement for public comment at Proviso Math and Science Academy in Forest Park and at the Marriott Chicago Medical District, 625 S. Ashland Ave. At the same meeting, CTA representatives presented their Blue Line Vision Study.

“Our goal is to offer a 45-mph speed that is a predictable and reliable trip through the corridor,” said IDOT Spokesman Pete Harmet.

The secret to this predictability, according to IDOT is the planned tolled “HOT+3” (High Occupancy Transportation) lane proposal. High Occupancy Transportation lanes would be toll-free for express buses and cars with three or more passengers. Vehicles with one or two passengers could use the lanes by paying a toll, calculated based on levels of congestion, Harmet said. Commute time for HOT-lane drivers will be reduced during peak hours by 56 percent, IDOT said in promotional literature. Harmet said the toll lanes would improve travel on the toll-free lanes by 25 percent as well, according to the study.

The four-year highway construction plan is expected to create 18,000 construction jobs, and cost $2.7 billion, according to IDOT’s promotion materials. The plan would stagger construction on other east-west corridors, specifically North Avenue and Cermak Road to ease traffic flow. Harmet said IDOT would redesign and construct bridges, in partnership with CTA. According to IDOT’s promotion materials, new designs would include better access for pedestrians and cyclists with wider sidewalks and east-west multi-use path. The new highway would also have better drainage.

“There are slow zones that can’t be kept at bay. Our track needs to be reconstructed from the ground up,” Mooney said.

Replacing tracks would involve removing and replacing gravel “ballast” which has sunk unevenly and has poor drainage. Wooden ties have also compressed, she said.

Replacing the track will likely be the first stage of repairs to minimize disruption with overlapping I-290 construction, Mooney said. Then CTA will focus on new ADA-accessible stations and the replacement of the Forest Park yard, shop and terminal and six power substations. The project is expected to cost $1.7 billion, but is contingent on available state and federal funding. 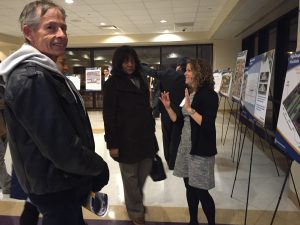 What won’t be happening any time soon is an extension of the Blue Line any further west than Forest Park, Harmet and Mooney agreed. IDOT’s environmental study determined that the population density is not high enough to support a CTA train line to Hillside or Oak Brook.

Populations west of Forest Park have access to several other modes of public transportation, Harmet said, including Pace buses and the Metra train line. Some of those residents will be able to get to the Loop faster via express bus in the new HOT lanes, he pointed out. However, Harmet said the new construction of the I-290 west of Forest Park would reserve space in the middle of the highway for future extension of the Blue Line, if that were to occur.

Mooney said CTA had not ruled out extending the Blue Line west, but that financial challenges were keeping them “focusing on replacing the existing track and facilities.”