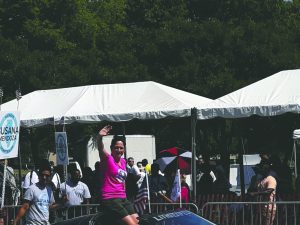 Illinois Comptroller Susana Mendoza waves to the crowd as she heads down the parade route. (Photo by Kevin Beese/Chronicle Media)

The Bud Billiken Parade turned 90 in style, with plenty of pomp, pageantry and politicians.

Several of the speakers at Saturday’s (Aug. 10) back-to-school bash in Chicago’s Bronzeville neighborhood promoted the value of education.

“Education is the key,” said U.S. Rep. Danny Davis (D-7th). “Get as much as you possibly can get. When you do, it is something that no one can ever take.”

Parade grand marshal Lil Rel Howery, who grew up in Chicago, told the young people present to continue to dream of what they can be.

“If you put your mind to something and keep on going, you have a chance to do whatever you want,” the actor said. “Dreams come true.”

The Chicago native who was the security guard in the movie “Get Out” and appeared on the NBC comedy “The Carmichael Show” said he was thrilled to be back in his hometown for the Billiken event.

“I love Chicago so much,” he told the crowd from the parade stand near 55th Street and King Drive. “I will represent you to the fullest.” 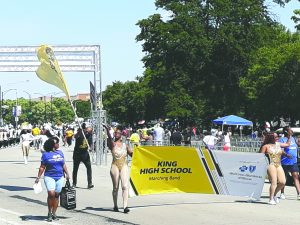 The King High School Marching Band led off the parade, which celebrated its 90th anniversary this year.

Illinois Lt. Gov. Juliana Stratton said that she and Gov. J.B. Pritzker would “continue to fight to fund the education system.”

Chicago Treasurer Melissa Conyears-Ervin urged the children present to make something of themselves by getting a good education.

“You are our future,” the city treasurer said.

Jackson called on those present to take action to stop the violence plaguing Chicago. 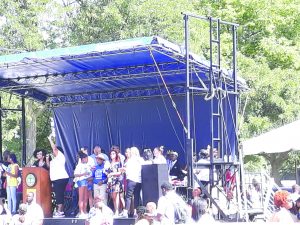 Chicago Mayor Lori Lightfoot speaks to the crowd during the event. (Photo by Kevin Beese/Chronicle Media)

“This is the year. This is our year,” Jackson said. “Stop the violence. Save the children.”

“Education is an escalator,” Preckwinkle said. “It’s an important link to opportunities and chances.”

Cook County State’s Attorney Kim Foxx promised that she would continue to “make sure the least of any of us is represented” in the legal system.