Chicago police officers on the afternoon of Thursday, April 9 drove past All Saints Cemetery in Des Plaines, flipping their sirens on as they went by, paying tribute to one of their fallen comrades. 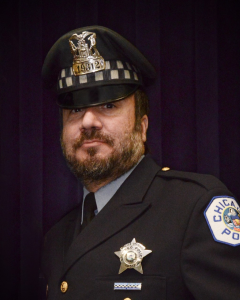 Officer Marco Di Franco, the first Chicago police officer to die from the coronavirus, was laid to rest Thursday in All Saints Cemetery. 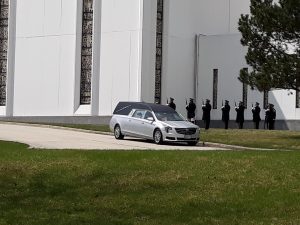 Members of the Chicago Police Department Honor Guard stand outside the chapel at All Saints Cemetery. (Photo by Kevin Beese/Chronicle Media)

Officers from throughout the state joined Chicago police in leading a procession from Cumberland Funeral Chapels in Norridge to All Saints Cemetery in Des Plaines. The procession stretched for blocks as it headed to the Des Plaines cemetery.

Officer Di Franco was appointed to the Chicago Police Department in 1998 and was a 21-year veteran of the department. 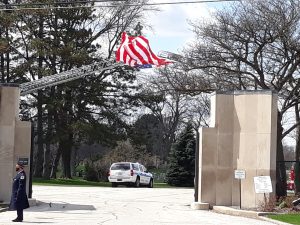 An American flag flies from the ladder of a fire truck at the entrance of All Saints Cemetery. (Photo by Kevin Beese/Chronicle Media)

He was most recently assigned to the Narcotics Division under the Bureau of Detectives. Officer Di Franco received 154 awards, including a Superintendent’s Honorable Mention and Special Commendation. His brother is a Chicago police officer and worked alongside him in Narcotics.

Officer Di Franco is survived by his wife and two young children.