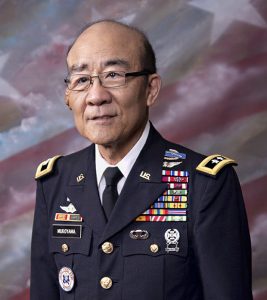 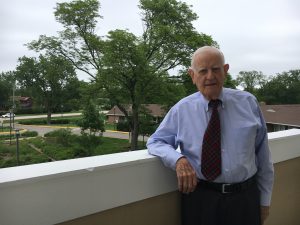 In a striking coincidence, two retired U.S. Army major generals live in the adjacent Chicago suburbs of Northbrook and Glenview.

At times, the most remarkable part of that is that they are both alive.

It’s not only because they survived decades of service in a profession that tends to shorten lives. And it’s not their age, though they’re not kids. Cliff Capp is 90 and Jim Mukoyama is 73.

It’s that they survived their retirement.

“The Department of Veterans Affairs says that 20 to 22 veterans are committing suicide every day,” Mukoyama, of Glenview, said last week. “And it’s actually higher than that. Many of the deaths are not reported as suicides, but as traffic crashes. And then there’s ‘suicide by cop,’” in which a suicidal person threatens a police officer with the intention of forcing the officer to kill him.

“We lose more veterans to suicide than to combat in the years since 9/11.”

Two-thirds, he added, are over 50 years old.

That’s not entirely surprising to those who spend a lot of time with the aftermath of suicide. Men in their 50s and older, veterans or not, are especially prone to it: they reach the point where they wonder what they have been doing with their lives all this time.

And bad things happen with more regularity as you age.

Something bad happened to Capp in January. His wife of almost 66 years died after 2½ years suffering from dementia and other ailments. Capp had spent sunup to sunrise at her side until a few months before her passing, as the doctors, worried he’d wear out, told him to cut back to half days.

Now he rattles around solo in the condo in Northbrook’s Covenant Village that Dottie Capp had designed just the way she wanted them to enjoy together. Sometimes it’s very lonely, he said.

“Sure I miss her,” he said. “I pray for her every day. But I’m doing OK, I can sleep at night, and I’m still trying to golf nine holes a week.”

One of the reasons he’s doing OK is probably that he’s busy with things that speak to his soul, not his bank account. He’s a Stephen Minister at the Village Presbyterian Church of Northbrook. Those are the guys who help out parishioners in crisis.

After his wife’s death, he organized a veterans’ contingent in the senior complex, which now has dozens of members, a sort of self-created support system. And the complex, he said, is full of friendly people.

Last week, he was one of 101 older vets on an Honor Flight to Washington, and he came back energized and happy with the support of his country. He’s becoming more involved with the Northbrook VFW post.

His own military service was mostly positive, involving training, not combat. And when Capp returned from a long stint of training overseas during the Korean War, he was given back his job teaching at Zion-Benton High School. He built on that second chance, creating a long career in administration in the Glenbrook District 225 high schools.

It was not that way for everybody.

“When I came back from Vietnam, it was horrible,” Mukoyama said. “We were told to not wear your uniform in public. But I was a young stud Airborne guy, and I wore my uniform. I wasn’t ashamed of it.”

Mukoyama is busy, too. He runs Military Outreach USA, a faith-based organization that includes in its mission helping veterans exit homelessness by stocking their new homes with the things of life.

Not being busy can be very bad for veterans, young and older.

“Generally speaking, when you’re in your 50s, an empty nester, no longer fighting tooth and nail, looking toward retirement, then the moral injury bubbles up,” Mukoyama said.

“The moral injury” he refers to is, basically, the trauma of combat, often compartmentalized at the time of occurrence.

Military personnel may have participated in killing others and witnessing killings, which is hard to subsume for a lifetime, he said.

“You can be a witness, feel that you should be preventing something, see innocent people killed, handle body parts. When you’re in the military, you’re constantly moving, from Point A to Point B to Point C, and you don’t have time to reflect it.”

These are memories that should have been attended to with therapy, which is available for free from the Veterans Administration. Mukoyama notes, however, that half of all veterans never use the VA at all, for anything. Taught to be self-sufficient in the service, many of them take the pamphlets they get at discharge and just throw them in a drawer, he said.

“Part of the warrior culture is you don’t admit weakness, just suck it up and move on,” he said.

Suicides by veterans, including the younger ones, are probably bound to get worse, not better, if changes don’t come. According to the Pentagon, they’re more susceptible to post-traumatic stress disorder, because of returning to combat repeatedly, and seeing more people killed and wounded around them. The military adds that in an all-volunteer military, the educational levels, and assumedly the coping mechanisms, are fewer.

Most of the military suicides are male, but that’s mainly because there are fewer women in service.

While there were, in 2015, 32.1 male suicides for every 100,000 service members, women’s rates were 28.7. Not much difference, especially when considering that in the general population, men commit suicide four times as frequently as women.

I looked in my mother’s World War II discharge packet a few days ago, and found little there regarding her future other than two letters recommending that she invest in U.S. Savings Bonds.

Post-discharge aid is much more sophisticated today, but there are a few important things that seems to be lacking that were very prevalent during my mother’s time that could make vets’ transition easier.

One is the kind of employment that Capp received upon his return. Not just a job, but a chance at the career he would have had if he hadn’t served his country. That does wonders for anyone struggling with self-worth.

In order to welcome veterans back today, with employment or anything else, the rest of us need to understand that there’s more afoot than a job change, however.

Most vets get along well. But “one of the problems when people come back from being in the military, it’s almost a cultural shock,” Mukoyama said.

“Some who have trouble adjusting, they no longer feel the purpose, and their duty is no longer clear.”

They feel lost, separated from a community, rich with honor and selfless serving, he said.

Maybe it would be easier on the veterans if we were more like them.

Maybe it would be better for all of us.