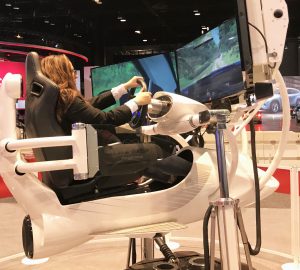 Ford’s interactive simulator at the Chicago Auto Show swerves and moves up and down as a tester drive a course viewed on three oversized video screens. (Photo by Jack McCarthy / Chronicle Media)

The 112th Chicago Auto Show lets visitors step into a peaceful park, cuddle some puppies and even immerse themselves in virtual reality road tracks.

But the main stars of the show, which runs through Monday, Feb. 17, are the latest and greatest vehicles from U.S. and world manufacturers at a one-stop McCormick Place West venue.

If money is no object, the Super Car Gallery shows off many of the world’s most expensive cars while fans of vintage Corvettes can check out models of Chevy’s 60-plus year mainstay.

Subaru emphasizes its environmental credentials with a scenic park-like display. It is also promoting pet adoption with space featuring playful pups who will be up for adoption. 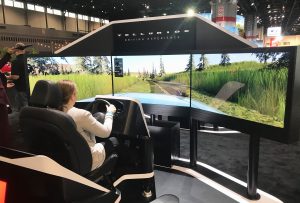 Newcomer Volkswagen joins others on the indoor test tracks while visitors can check out Kia and Ford virtual tracks.

For more information, go to the 2020 Chicago Auto Show page.