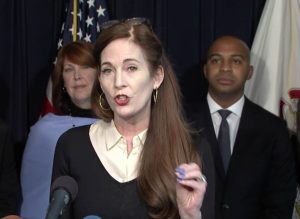 Liz Nicholson, the wife of a former National Football League offensive lineman, said she has seen the rage that comes out of the blue, the anger and the violence that comes from a football life. (Blueroomstream.com)

Liz Nicholson does not understand parents’ willingness to “play Russian roulette with their kid’s brain” by letting them engage in tackle football at a young age.

The wife of a former National Football League offensive lineman, Nicholson said she has seen the rage that comes out of the blue, the anger and the violence that comes from a football life. She has worked on behalf of NFL players to get them treatment and support. She also works to warn parents about the dangers that violent hits can have on the developing brains of young players.

“The most frustrating thing is the ‘my son must play tackle football’ mentality,” Nicholson told the Chronicle. “For what? A chance at a scholarship? Do you know the odds of that? Is it worth putting your child’s health at risk?”

Nicholson, the wife of Gerry Sullivan, who played for the Cleveland Browns from 1974-81, supports the legislation proposed by state Sen. Carole Sente (D-Vernon Hills) that would prohibit contact football in Illinois for players younger than 12.

“I don’t know if it will pass,” Nicholson said of the legislation, adding that just getting the message out about youth football’s dangers is a victory. “I am here to say ‘People, it is not just NFL players who suffer brain injuries. High school football players can get CTE (chronic traumatic encephalopathy) as well.”

CTE is a progressive degenerative disease of the brain found in people with a history of repetitive brain trauma (often athletes), including symptomatic concussions as well as asymptomatic sub-concussive hits to the head that do not cause symptoms. CTE can only be determined after a person dies.

One Democratic insider says the proposed legislation faces a very tough, uphill climb as many lawmakers don’t want to be associated with killing youth football in their community.

Despite seeing CTE symptoms in her husband and other former players, Nicholson said her views are often discarded because she is a woman and not one of the “warriors that played the game,.”

“OK. You want to see what tough guys are like now?” Nicholson asked. “We see it. We are the one who deal with that guy who got the sh** kicked out of him as an offensive lineman.” 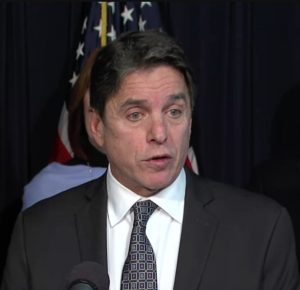 She said symptoms she has seen in her husband and other former NFL players include horrible bouts of rage coming from out of the blue where there is screaming and unmitigated anger, domestic violence, sleep disturbances and isolation.

Nicholson said initial warning signs are often swept under the rug because the whole issue can be embarrassing.

“The wife and family can start seeing changes, but the husband is the hometown hero,” she said. “No one wants to hear about him being a raving lunatic who sits in a dark room and watches TV all day or who’s drinking or drugging.”

The Chicago resident said she is encouraged that New York could follow suit with similar legislation. Nicholson is also encouraged that parents in some communities are so concerned about the impact that hits have on their children’s developing brains that the town has not seen enough kids turn out to form a team.

“(Kids) have to learn the fundamentals so have them play flag football,” Nicholson said. “We want kids out playing. We are not saying kids can’t play. We are just saying up to a certain age have them in flag. Then let the parents make a decision. I would not put a kid anywhere near contact football, but that’s me.”

Nicholson is one of the few female members on the board of the national Concussion Legacy Foundation, along with the wife of former NFL tight end John Mackey.

She said the ex-players’ stories all have a familiar ring to them where the player is a different person in his retirement years. Nicholson pointed to Ray Easterling, a former Atlanta Falcons’ defensive back who was a Christian and not a big party guy during his playing days but suddenly was a heavy drinker six years after leaving the National Football League. 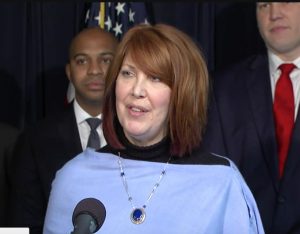 Amid growing concern of repeated head injuries in football, state Rep. Carol Sente joined with a coalition of Chicago football stars, medical experts and advocates Thursday at the start of the Illinois General Assembly’s 2018 legislative session to call for new protections in youth football. (Blueroomstream.com)

“It is like living with a rattlesnake,” Nicholson said of being with a former player with brain issues. “It can be scary as hell.”

Amid growing concern of repeated head injuries in football, state Rep. Carol Sente joined with a coalition of Chicago football stars, medical experts and advocates Thursday at the start of the Illinois General Assembly’s 2018 legislative session to call for new protections in youth football.

Sente and the coalition unveiled the Dave Duerson Act to Prevent CTE that would end organized tackle football for youth under age 12. Duerson was the starting strong safety on the 1985 Chicago Bears Super Bowl team and captain at the University of Notre Dame who took his own life at age 50, and was found to have the brain disease chronic traumatic encephalopathy that has been linked to head impacts received playing football.

The advocates support the legislation’s contention that repeated hits to the head can cause CTE and that tackle football is an inappropriate activity for children before they turn 12. 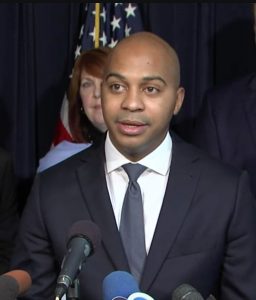 “When my father tragically took his own life, he donated his brain to science in hopes of being part of the solution,” Tregg Duerson said. “Thanks to increased attention and research on brain trauma, we know that part of the solution is to guard young children’s developing brains from the risks of tackle football. This bill honors my family’s hopes and my father’s legacy to protect future athletes and the future of football.”

The coalition also pointed to overwhelming public support from former and current football players and coaches, and the general public to end tackle football for pre-teens, and to encourage them instead to play flag and other non-contract versions of football.

Sente has sponsored and supported a number of proposals in recent years in Illinois aimed at reducing concussion and other head injuries in youth sports that can create lifelong problems. A youth tackling ban is the critical evolution of that public policy work, she said.

“We all want kids to have fun playing football and to learn to play the game the right way early on, but the overwhelming data and powerful stories of our supporters show the risks of playing tackle football before turning 12 just aren’t worth it,” Sente said. “We have a long road ahead, but I am confident we have the science on our side and can make a very persuasive argument that safer football for youth will lead to healthier and more rewarding lives for generations to come.”