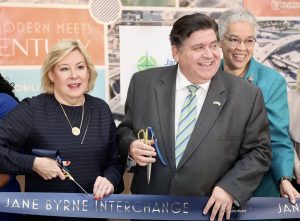 Gov. J.B. Pritzker, is accompanied by (left) Kathy Byrne, daughter of the late Mayor Jane Byrne, and Cook County Board President Toni Preckwinkle at the opening dedication of the completed Jane Byrne Interchange Project in Chicago on Wednesday, Dec. 14. (Illinois.gov)

State and local officials and community leaders marked the completion of the Jane Byrne Interchange reconstruction in Chicago on Dec. 14.

The interchange is a multiyear effort to modernize a key gateway into downtown Chicago and a critical transportation hub for the region.

It connects travelers from the Kennedy and Dan Ryan expressways (Interstate 90/94) and the Eisenhower Expressway (Interstate 290) with the principal route in and out of Chicago in Ida B. Wells Drive.

The project took 10 years and a combined federal and state investment of $806 million, making it one of the biggest transportation projects in state history.

“For almost a decade, Illinois’ first-rate workforce worked day in and day out to entirely reconstruct this massive project,” Gov. J.B. Pritzker said. “And in the last few years, IDOT accelerated and streamlined the construction process to get this done — and the great men and women of Illinois’ construction industry persevered. They are the ones who made this happen. I know I speak for all of Illinois when I say that we couldn’t be more grateful for the labor and dedication of every single worker on this project.”

A fourth lane on the Dan Ryan and Kennedy lanes through the interchange also are due to open this week.

VIDEO: Traffic in snow traveling along the interchange 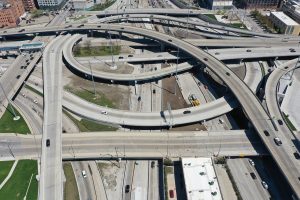 The finished product is predicted to result in a 50 percent reduction in vehicle delays, saving motorists an annual 5 million hours previously spent sitting in traffic and $185 million in productivity, according the state. Vehicle emissions are anticipated to reduce by a third, with annual gas consumption decreasing by 1.6 million gallons a year. Crashes are predicted to go down 25 percent.

The Jane Byrne Interchange, named for the late Chicago Mayor, is a tri-level interchange situated between the city’s central business district, the University of Illinois Chicago campus, and the Greektown neighborhood.

The interchange also serves as a local travel corridor for businesses, residences and other attractions via neighborhood streets, the Chicago Transit Authority and bike and pedestrian accommodations.

Cook County Board President Toni Preckwinkle praised the cooperation of public and private sector agencies working together on the project over the past decade.  She also said one of the goals of the project was to reconnect neighborhoods in the immediate area and reduce local traffic congestion.

Projects like this “are fundamental for building equitable communities and a stronger economy,” Preckwinkle said.