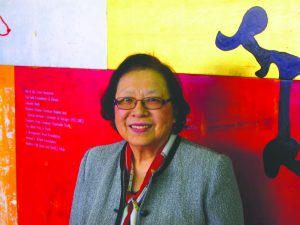 What started out as a fellowship organization for University of Chicago students has grown into a powerful, all-encompassing service agency for the Chinese-American community.

Esther Wong was one of the 10 founders of the group that became the Chinese-American Service League, celebrating its 40th anniversary. She stayed part of the leadership team for nearly four decades.

“We were foreign students at the University of Chicago,” Wong said of the students from Hong Kong who were getting together. “We would gather and do a pot luck.”

Some of the students needed help navigating things in American culture. They got help from their peers in the group and then started volunteering their time to help other foreign students and new residents needing assistance.

Their efforts led to the formation of the Chinese-American Service League in 1978. CASL is the largest social service agency in the Midwest serving the needs of Chinese-Americans. It has a $14 million budget, 540 employees and serves more than 12,500 clients annually, offering everything from preschool programs to trips for senior citizens.

Esther Wong served as executive director of the organization and Bernie Wong (no relation) served as president of CASL for nearly 40 years.

CASL leaders note the organization would not be what is it today without the dedication and direction of Esther and Bernie Wong.

“They are tiny women with such versatility and power,” Paul Luu, chief executive officer of the agency said of the two retired CASL leaders. “They did so much for our community. They gave life to it. Our community is very thankful for what they did.” 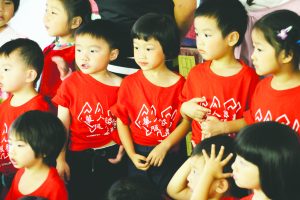 Five-year-olds in the Chinese American Service League’s preschool program graduate and move on to the elementary age after-school program. CASL, a fixture in Chicago’s Chinese-American community, is celebrating its 40th anniversary. (CASL photo)

Luu said he hopes new eyes from the likes of himself and Jered Pruitt, chief operating officer, will take the Chinatown-based organization to even greater heights.

“I hope we continue to add value to CASL’s history and mission,” Luu said. “We want to impact the lives of the people we serve.”

Luu said one focus for the organization in the future will be mental health services to support a growing senior population.

He said CASL is also examining how to provide social and emotional support to young people in Chinatown and beyond.

“Education is not just about books. We want to develop young adults,” Luu said. “We want our students to be leaders one day.”

Pruitt said CASL’s teen center was designed with that in mind.

While CASL offers housing and employment assistance, child care, health care services and a pro bono legal clinic, it also partnerships with other organizations for offerings.

“We have partnerships because we are not experts in everything,” Pruitt said. 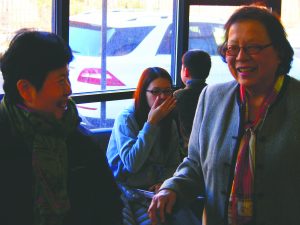 Esther Wong, one of the founders of the Chinese American Service League, shares a laugh with longtime fellow worker Tammy Lau

Esther Wong said people were leery to come to the Service League initially, thinking it was tied to the government.

“They did not expect services to have no strings attached,” Wong said.

Wong said she is proud of the help that CASL provides to residents of the Chinatown area and beyond.

“There are a lot of obstacles you have to overcome to get services,” she said.

Luu said he is proud that clients do not have to make multiple trips to the organization to address the same issue.

“People do not have to come back. Maybe it’s a quick issue. Maybe it’s a two-hour meeting for employment service. We can have the majority of a family in here at one time,” Luu said. “We serve two or three generations at one time sometimes. We want to make sure the younger generation, in 20 years from now, will not be coming back for service. We will look at our current and existing programs and see where they can be wrapped with innovation and technology in the market.”

Pruitt said he is proud that CASL offers a “full breath” of services for the entire family, noting that 50% of clients use multiple CASL services.

While CASL offers many programs, it never wants to create programs just to add to its numbers, Pruitt said.

“Rather than being too consumed with the volume, we are more concerned with the quality and a demonstrated impact on those we serve,” he said.