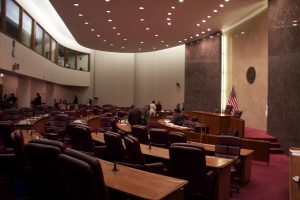 Chicago Ald. Ameya Pawar (47th) vividly remembers his social work as a graduate student counseling some of “The Lost Boys of Sudan,” children who were made to snort cocaine and gunpowder in order to go and kill other children.

“These are kids that resettled in Chicago, who we helped nurture and provide services to start a new life,” the 47th Ward alderman said.

He noted that as a graduate student he also calmed the fears of Iraqi refugees when the annual Chicago Air & Water Show came around, letting them know that the city was not under attack “because that is the reality they lived in Iraq.”

“I understand that it is easy in today’s climate to pick on one group, pit them against one another,” Pawar said. “Remember the refugees who resettled. It’s part of our humanitarian efforts to help people. It’s not about Democrats and Republicans. It’s just about helping people.”

For the third consecutive meeting, aldermen last week took a stand against the Trump administration. In the most recent move of defiance, aldermen overwhelmingly approved a resolution affirming that the city will honor and protect the rights of all Chicagoans regardless of race, ethnicity, immigration status, age, sexual orientation, ethnicity and gender identity.

The resolution passed 47-2, with Ald. Anthony Napolitano (41st) and Nicholas Sposato (38th) voting against the resolution. Neither Napolitano or Sposato made any comments on the issue prior to casting their “no” vote. Ald. Carrie Austin (34th) was absent.

In the previous two meetings, the City Council reaffirmed its commitment to remain a Sanctuary City, welcoming refugees who are fleeing war-torn areas.

“It’s very apparent that over the next few years, while this man is in office, we are going to have to be vigilant, watchful and active in opposition to the message of divisiveness that we see coming out of the nation’s Capitol,” Dowell said. “We are going to all have to oppose every effort whether it’s at the federal level, state level or local level to pit us against each other.

“We are all in the boat together. We’ve heard that a million times. We are going to sink or swim together. That is the reality, folks.”

Michele Smith (43rd), one of several aldermen to take part in the recent Women’s March in Chicago, said the march participants reflected “the beautiful diversity of our city.”

“We are the great metropolis of Chicago that welcomes everyone and has done so since its very founding,” Smith said. “It’s important as it possibly can be to remind our fellow citizens what we stand for.”

Ald. Deborah Mell (33rd) said she stands in solidarity with anyone whose dignity is being threatened by the White House.

“What people will never understand is that our history, our nation of immigrants are people who we want to be here. That makes us great, not the bigotry, not the divisiveness and not the fear monger we are going to have to combat over the next several years,” Mell said. “… I bear witness each day at how our refugees add to the character of each neighborhood. I spend time with them in our schools and parks and everyone of them want the same thing.

“They want a safe neighborhood to live in, a good school to send their kids to, and the opportunity to roll up their sleeves and do their part in the collective of the American dream. I support any and all who are living in fear. I am here for you. The people of Chicago are here for you.”

Having to reaffirm the city’s stance to protect all people is a sad state of current affairs, according to Ald. Brendan Reilly (42nd).

“I think this is, unfortunately, timely and needed,” he said of the resolution.

He also had some advice for Ald. Pawar, one of the resolution’s sponsors.