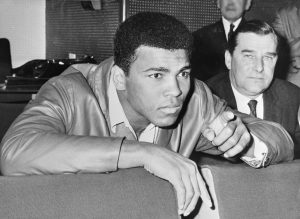 Muhammad Ali’s passing on June 3 brought an outpouring of praise for the man, as well as the athlete, from many individuals in leadership roles and people with ties to Cook County and Chicago. (Dutch National Archives, The Hague, Fotocollectie Algemeen Nederlands Persbureau (ANEFO), 1945-1989)

While boxing legend Muhammad Ali became one of the most recognizable faces in the world, there was a time when he was seen more in Chicago than anywhere else.

The former Cassius Clay, who changed his name to Muhammad Ali after winning the heavyweight championship in 1964, was stripped of his title and banned from boxing in 1967 when he refused to enlist in the U.S. armed services during the Vietnam War. He took refuge in an apartment on the 7000 block on South Cregier Avenue in Chicago.. He would remain a resident of the city until the late 1970s, eventually buying a brick mansion on the 4900 block of Woodlawn Avenue in Chicago to be close to his mentor, the Nation of Islam’s Elijah Muhammad.

Ali trained in Chicago for a few of his fights and conducted a couple exhibitions in the city, but never had a professional bout in Chicago.

His passing on June 3 brought an outpouring of praise for the man, as well as the athlete, from many individuals in leadership roles and people with ties to Cook County and Chicago.

“He was a person on conscience, a citizen of the world. His principled stance against the Vietnam War cost him the prime years of his boxing career, but his moral compass never wavered,” Preckwinkle said. “He was a champion of civil and human rights, both here in the U.S. and around the world.

“Even as he fought a debilitating disease for more than a decade, his strength of personality and charisma were apparent at every public appearance. My sympathies go out to his family and friends everywhere.”

President Barack Obama issued the following statement regarding the passing of the boxing legend:

“Muhammad Ali was The Greatest. Period. If you just asked him, he’d tell you. He’d tell you that he was the double greatest, that he’d ‘handcuffed lighting, thrown thunder into jail.’ 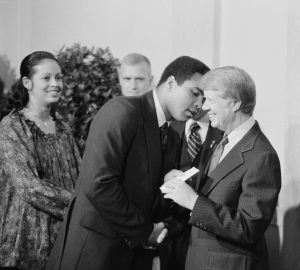 “But what made The Champ the greatest – what truly separated him from everyone else – is that everyone else would tell you pretty much the same thing.

Civil rights leader Jesse Jackson Sr., founder and president of the Rainbow PUSH Coalition, said the world has lost one of the greatest heroes of all time.

“He sacrificed the heart of his career and money and glory for his religious beliefs about a war he thought unnecessary and unjust,” Jackson said. “His memory and legacy linger on until eternity.”

ESPN analyst Michael Wilbon, who grew up in Chicago and first met Ali in a Sears store on the South Side, said he didn’t know if the legend was aware of it or even cared about it, but was at the forefront of changing television and news coverage.

He said on ABC’s Wide World of Sports announcer Howard Cosell would try to direct the conversation one way and Ali would take the discussion in a totally different direction.

“Just the tension of live television with Muhammad Ali able to say whatever the hell he wanted to say,” Wilbon said. “People think there is must-see TV now. There is nobody like this. There is no one like this … Public figures who think they are speaking out boldly, they’re not talking about anything that matters, not like war. With Ali, there wasn’t anything at the height of his career that he wouldn’t take on. And, of course, the three best years of his career, almost certainly, were taken away.”