The Humboldt Park gator is still on the sly.

‘Alligator Bob’ as the herpetologist is known, not wishing to reveal his last name, said the Chicago alligator is likely hiding to shy away from people and lenses. 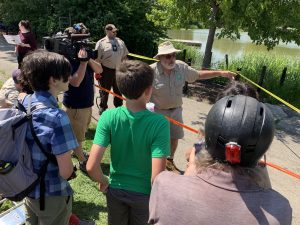 Herpetologist known as ‘Alligator Bob’ talks to the curious crowd to get a glimpse of the alligator that has been hiding out in the Humboldt Park lagoon. (Photo by Karie Angell Luc/for Chronicle Media)

The alligator, which has eluded traps and Alligator Bob’s prowess for days, is barely four feet long, Bob said on July 12, adding the animal is absolutely an alligator and not a crocodile.

“This thing is not a big animal,” Alligator Bob said. “He’s a pet that was raised in captivity and he’s in heaven and he’s in hell.”

Alligator Bob, who has called the person who dumped the alligator an“idiot,” has used several strategies to capture the alligator but as of 3:15 p.m.on Friday., to no success.

“This is the most beautiful place for gators, with the hot sun, the beautiful plants, you know, the water, but he’s also looking for where’s the big bad boss, who owns this property,” Alligator Bob said.
“He’s trespassing right now. So he’s hiding from everything,” he said. 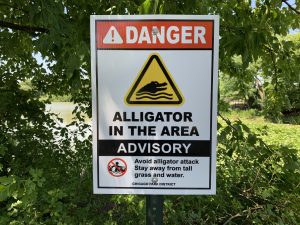 Signs have been placed in Chicago’s Humboldt Park warning visitors to be cautious with the mysterious alligator that has taken up residence there. (Photo by Karie Angell Luc/for Chronicle Media)

Of more than 60 sightings on Friday, July 12 only one is true, he said.

“He’s a nervous wreck,” Alligator Bob said of the animal.