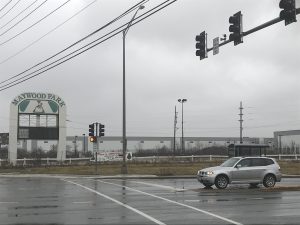 Part of the former site of Maywood Park race track will be used as an Amazon delivery station. The Melrose Park property has been granted a tax incentive for the warehouse space that will be leased by Amazon. (Chronicle Media photo)

E-commerce giant Amazon will increase its presence in Illinois this spring when it opens a delivery station in near west suburban Melrose Park.

Amazon will occupy 600,000 square feet on the former site of Maywood Park race track, mostly likely by sometime in April. It will be the biggest delivery station in the closest proximity to the Chicago city limits.

Melrose Park Mayor Ron Serpico said it is too early to estimate what financial impact the distribution center would have on his community and how many jobs the business would generate for the area.

In a statement, Amazon Logistics said the Melrose delivery station “will power Amazon’s last-mile capabilities to speed up deliveries for customers in the Chicago metro area.

“Delivery stations enable Amazon Logistics to supplement capacity and flexibility to Amazon’s delivery capabilities to support the growing volume of customer orders. Additionally, the station will create hundreds of part-time and full-time jobs, starting at $15 per hour.

“Delivery stations also offer entrepreneurs the opportunity to build their own business delivering packages on behalf of Amazon.”

Amazon said it expects the site to open in 2020. Serpico said he expects the facility to open by April.

He said that several months ago, when warehouse facilities began to be built on the former racetrack property, it was mentioned to him that Amazon could be interested in the site.

“Just because there is interest, it doesn’t necessarily mean it is a done deal,” Serpico said.

As an example, he cited Buffalo Wild Wings, which got speculation started when the franchise contacted the village about a liquor license for a certain property. A Chick-fil-A wound up on the site.

Ever since the Illinois Racing Board pulled racing dates from the Johnson family in 2015, Maywood Park (which despite its name never was in the village of Maywood), has been a stagnant parcel, Serpico said.

“It means an eyesore is gone,” Serpico said of the race track facilities being torn down.

A myriad of developments were proposed for the property in unincorporated Cook County, but none came to fruition. Eventually the property wound up in the hands of U.S. Bank. The main portion of the property, 60 acres in diameter, voluntarily came into Melrose Park and an industrial developer started putting up warehouse facilities on the former race track site.

The property being developed is not in a tax increment financial district, which would cause taxing bodies’ income to be frozen and the additional increments in property taxes to be used for improvements in the area or given back to the developer in incentives. However, the property has been granted a 6b tax incentive, a tool to encourage industrial development in Cook County. The parcel, located along North Avenue, will be assessed at 10 percent of market value for the first 10 years, 15 percent in the 11th year and 20 percent in the 12th year.

Industrial real estate is normally assessed at 25 percent of its market value. 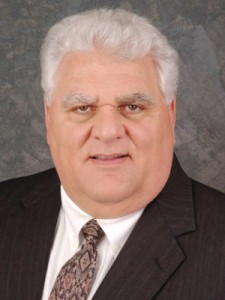 Serpico said there shouldn’t be any more traffic generated in the area with Amazon’s sprinter vans in and out of the facility than was generated when Maywood Park was in full swing.

“The track always had traffic,” Serpico said. “My wife grew up around there and could hear the call of the races from her house. The barns were right up to people’s back yards. For the residents, the warehouses are better. The buildings are not as close to their property and there is a detention area.”

Amazon has said that it has invested more than $4 billion in Illinois since 2010 “through its local fulfillment centers and cloud infrastructure, research facilities and compensation to thousands of employees in the state.”

Amazon has more than 11,000 full-time employees in Illinois.

Serpico said even if the Amazon’s Melrose facility is more automated than the e-commerce leader’s other facilities, he still sees benefits besides the property taxes the facility will generate.

“Even with just the drivers, they will buy a sandwich in the area. They will go to Winston Plaza (a nearby shopping center) to buy something,” the mayor said. “There will be collateral benefits. We will see some sales tax benefit.”

Serpico said he would like there to be a preference given to Melrose Park residents for the jobs the facility will offer.

“I would think they would want people to work there who live closer. It is better for the employer,” Serpico said.

The Melrose Park mayor said he will also make a pitch for Amazon to be involved with nearby Triton College, continuing with the company’s philosophy of being involved with community colleges.

“Triton is five blocks away. We will hook them up with Triton,” Serpico said. “There could be a nice relationship there. It could be fruitful.”

Serpico said the Amazon development will be on the back of the race track property. The 16 acres to the front of the parcel will be developed as yet-to-be-announced commercial space.