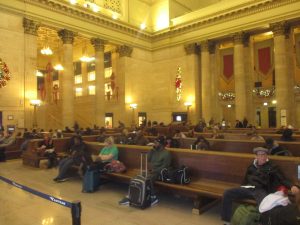 Passengers heading home for Thanksgiving on the train in Illinois and Michigan will have more options than usual on Nov. 22 and Nov. 26.

As it has done for the past few years, Amtrak and the Illinois Department of Transportation added extra trains on the Carl Sandburg/Illinois Zephyr corridor, which serves southwestern Illinois between Chicago and Quincy, and Lincoln Service corridor, which connects Chicago and St. Louis. Amtrak and Michigan Department of Transportation are also increasing service on the routes between Chicago and various points in Michigan. The extra trains will run the day before Thanksgiving and on Sunday, Nov. 26.

Chicago Union Station serves as the largest train hub in the Midwest, serving as a terminal for all Amtrak routes in the region.

Those routes can be divided into two categories.

The long-distance routes, which tend to be longer then 750 miles, connect major cities across several states and are largely funded by the government. The state-supported routes are no more than 750 miles and tend to run either within a state or several nearby states. As the name implies, most of the operating costs are covered by the states they serve. While long-distance train schedules usually remain the same every day of the year, some states beef up the service on some, if not all, routes they’re funding during major holidays. 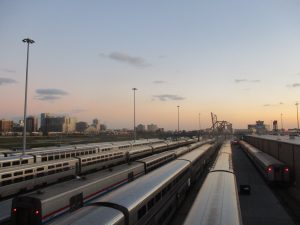 The Lincoln Service route makes stops in Chicago, Summit, Joliet, Dwight, Pontiac, Bloomington-Normal, Lincoln, Springfield, Carlineville, Alton and St. Louis. The train runs four times a day. Between Chicago and Joliet, it shares tracks with Metra’s rush-hour only Heritage Corridor line. While passengers can take the train from Chicago to Summit, St. Louis-Chicago trains don’t pick up any passengers at that station.

The Carl Sandburg and Illinois Zephyr trains follow the same route, with the former traveling from Chicago to Quincy in the morning and returning to Chicago in the evening, while the later travels from Quincy to Chicago in the morning and returns in the evening. Both stop at LaGrange, Naperville, Plano, Mendota, Princeton, Kewaneee, Galesburg and Macomb. Because LaGrange and Naperville are served by Metra’s BNSF line, Quincy-bound trains don’t drop passengers there, while Chicago-bound trains don’t pick any passengers up.

Like Carl Sandburg/Illinois Zephyr, Illini and Saluki trains follow the same corridor, running through southeastern part of the state between Chicago and Carbondale. There will be no extra service during Thanksgiving, though acording to Amtrak press release, the two trains will have more train cars than usual.

Hiawatha train runs between Chicago and Milwaukee, making stops in Glenview, Sturevant, Wis. and at Milwaukee Airport Rail Station. As previously reported by the Chronicle, it is the busiest route in the Midwest, running 6-7 trains on weekdays and six trains on weekends. The route is jointly funded by IDOT and Wisconsin Department of Transportation. While they don’t plan to beef up any service, between Nov. 21 and Nov. 27, the usual ticketing policy will be suspended.

Hiawatha is one of the handful of Amtrak trains that uses unreserved seating systems. Riders don’t need to have tickets before they board, but that also means that they aren’t guaranteed seats. For the Thanksgiving week, the train will use the reserved seats system to avoid overcrowding.

Michigan Department of Transportation, on the other hand, is adding extra trains on its Wolverine and Pere Marquette routes during the same days as IDOT. Wolverine runs between Chicago and Pontiac, Mich. through northwestern Indiana and most of the southern Michigan, making stops in New Buffalo, Kalamazoo, Ann Arbor and Detroit, among other destinations. Pere Marquette runs between Chicago and Grand Rapids, Michigan, stopping in St. Joseph, Bangor and Holland. MDOT will run an extra Wolverine train in both directions between Chicago and Ann Arbor. It will skip Hammond-Whiting and Michigan City stops in Indiana and Dowagiac and Albion stops in Michigan.

In an official statement, Amtrak spokesperson Marc Magliari noted that Thanksgiving week is the busiest week for the entire system — and he expected this year to be no different.

“Last year, Amtrak carried 760,755 customers throughout its national network during the Thanksgiving travel period,” he stated. “Similar customer counts are anticipated this year.”

Thanksgiving Service in Other Systems

In Chicago area, Metra has traditionally added extra afternoon rush hour service the day before Thanksgiving, and it has occasionally added service on some lines during Black Friday. On Thanksgiving itself, all lines operate on Sunday schedules.

Metra spokesperson Michael Gillis told the Chronicle that, while is planning extra service this year as well, the agency isn’t prepared to release details before this issue’s deadline.

The Metra extra service schedules are usually posted on its website at the start of the Thanksgiving week, and paper copies are usually available at most stations at the same time.

The South Shore Line, which serves Chicago’s Hegewisch neighborhood and Northwest Indiana, will also follow Sunday schedule on Thanksgiving Day. While it usually offers extra service on Thanksgiving week, those plans have not been finalized by this issue’s deadline, either.

As has been the case during all major holidays, Chicago Transit Authority buses and “L” train lines will operate on Sunday schedule during Thanksgiving day.

Pace suburban bus system doesn’t operate any extra service during the Thanksgiving week. On Thanksgiving day itself, it usually operates a pared-down version of the system, running only certain routes, and having those routes run on Sunday schedules. According to Pace spokesperson Maggie Daly Skogsbakken, the agency is changing up things slightly this year.

In St. Louis and its suburbs, Metro Transit system won’t have any extra service during Thanksgiving week, either. On Thansgiving Day, both MetroLink and buses will run on Sunday schedules. Madison County Transit buses, on the other hand, won’t operate on Thanksgiving at all, and the transit agency is planning to extra service the rest of the Thanksgiving week.

The Greater Peoria Mass Transit District, which serves Peoria, Peoria Heights, West Peoria and Pekin, won’t have any service on Thanksgiving. The day before Thanksgiving, it tends to end service earlier than usual, but that information isn’t publicly available by this issue’s deadline.

The other transit providers within the Chronicle Media’s coverage area follow a similar pattern. Connect Transit, which serves the Bloomington-Normal area, has no service on Thanksgiving, and its service is otherwise unaffected. The same is true for Rockford Mass Transit District, which serves Rockford, Loves Park, Machesney Park and Belvidere.