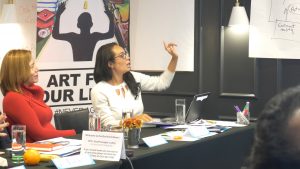 Janice Tisha Samuels (right), founder and executive director of National Youth Art Movement Against Gun Violence, makes a point during the NYAM curriculum kickoff in November. NYAM is seeking to create a national curriculum involving the arts. Next to Tisha Samuels is NYAM board member Sara Knizhnik with People for a Safer Society. (NYAM photo)

A Chicago-based organization is looking to use art to curb the gun violence plaguing communities across the nation.

The National Youth Art Movement Against Gun Violence is developing a curriculum it hopes to see implemented in high schools across the country. Drawing on youth violence and school climate research, the curriculum aims to promote a grassroots culture shift in schools that discourages bullying, hatred, and isolation as behavioral norms and supports instead the development of peer-to-peer compassionate communities in schools that can provide holistic and sustainable interventions for youth that are student-led and student-centered.

“History shows that youth who are bullied and youth who bully others are five times more likely to want to carry a weapon for a sense of protection,” said Janice Tisha Samuels, the founder and executive director of the National Youth Art Movement. “Squash bullying and it has a direct effect.”

She said the effort is aimed at addressing negative behavior and violence through an arts-based curriculum and simply getting teens to talk with and understand each other.

“Let’s get to know each other,” Tisha Samuels said. “The most valuable thing in the program is we have peer groups leading the curriculum. This is our push.”

She said that NYAM’s proposed curriculum is something needed in schools today.

“The curriculum we want to create does not exist as a unified area of study for youth across the country. What does exist though are lockdown drills in our schools for when there is an active shooter,” Tisha Samuels said. There is not a unified curriculum on social behavior and connectiveness with youth. What we are proposing is very different.”

Tisha Samuels said the goal is to get pilot programs into one school in five different regions of the country.

The NYAM founder said she started with the curriculum concept after getting a cohort of young people together and asking them to create artwork on what people might be missing in the gun-violence talk, and how things are perceived contrary to reality. She said after the youth made the art, they all sat down and had conversations.

“They sat and talked about gun violence,” Tisha Samuels said. “We got different people in the room. … Learning happened and was reflected in the growth process.

“NYAM does not want to just do artwork. We want a gun-violence coalition. There should always be a combination of art and activism.”

Bella Masterson, a member of NYAM’s high school curriculum think tank, said the group’s proposed curriculum would be a game-changer.

“The systematic defunding of arts programs in Chicago Public Schools (and public schools across the country) has been a problem for decades; and NYAM’s curriculum project will contribute so much to how youth get involved with art in high school,” the Chicago resident and recent graduate of the University of Pennsylvania wrote in an email. “The emphasis on and commitment to youth leadership that this curriculum incorporates is missing in most traditional art class settings.”

Bella Kiser, another member of the curriculum think tank, agreed that the NYAM education component is missing in high schools today.

“A national arts curriculum would highlight the importance of the arts in formative education, a field that is often excluded,” said the Chicago resident and student in Tufts University’s Bachelor of Science and Bachelor of Fine Arts program. “NYAM’s curriculum is unique in that it focuses on the social justice issue of gun violence. The program not only promotes arts education, but also activism education.”

Kiser and Masterson are also co-founders of the Teen Arts Creative Oasis, giving youth outlets for the creativity.

NYAM uses art activism, commercial billboards, and augmented reality technology for youth-led campaigns for social good. Each art piece is developed by youth between the ages of 13 and 28 in response to epidemic levels of gun violence in their communities and in the country. 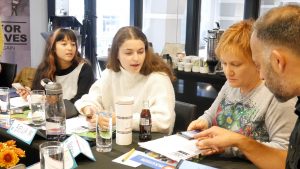 Young artists use their city as a blank canvas, putting artwork on buildings or billboards in a neighborhood. Passers-by and observers can use their smart phone for an overlay that talks about the work and how they can get involved in gun-violence solutions. The artist is then pegged to help develop an outdoor art exhibit the following year in another U.S. city experiencing gun violence.

Knizhnik said that the 30,000-foot view is that all people want to do something about gun violence.

“The first reaction, unless you have personally dealt with gun violence, is ‘We have to change the law,’” said Knizhnik, a board member with People for a Safer Society. “NYAM is a forward-thinking organization. It is aimed at more than legislative changes. Cultural change is the only thing that will lead to a reduction in gun violence.”

Tanya Sharpe, a community-based researcher at the University of Toronto, has spent the past two decades looking at the cultural trauma of homicides and what coping strategies those who are left behind use.

“With NYAM, there’s some synergy there,” Sharpe said. “You are merging the arts with developing youth as leaders. I look forward to it coming to fruition.”

Sharpe said the organization is pointed in the right direction.

“NYAM is leading the charge for youth,” she said. “It is seeking culturally responsible approaches to gun violence in communities.”

Kelvin Ramirez, associate professor of expressive arts at Lesley University in Cambridge, Massachusetts, said the root cause of gun violence can be traced to intergenerational trauma.

“It’s systemic,” Ramirez said. “You have the New York City police doing stop and frisk. You have kids having to navigate gang territory to get to school. (NYAM’s) approach is a no-brainer.”

He said the NYAM think tank has brought experts in various fields together to delve into curriculum that will give individuals a voice through artwork. By their peers running the program, the message is amplified, Ramirez added.

“It is not us old folks coming in and saying, ‘This is how it’s done,’” Ramirez said. “The program is sharper and better because of the changing dynamics that youth bring. We bring our area of expertise, but the youth experts will lead us through it.”

The Lesley University professor said that the program stresses that every individual is heard.

“Arts education amplifies each individual voice. We have not seen this,” he said. “We’ve seen hints of it whenever there is a mass shooting, but the talk fizzles out. NYAM responds to the gun-violence epidemic outside of mass shootings.”

Ramirez said gun violence is a symptom of the injustices in society.

“We need to control the conversation at a different level. They are not going to be young forever. At some point, they are going to be part of a larger voting bloc. They can be agents of change. In four or five years, they can be voting. That is at the heart of the situation.”

Robert Fritz, a filmmaker, author, and consultant, said he was lucky enough to grow up in the arts. He said arts education gets people out of living in the immediate “with no sense of consequences, no sense of future.”

“The arts promote aspirations and values. There is nothing like the arts,” Fritz said. “I worked on a documentary that addressed music’s impact on childhood development. Learning the arts changes the brain. It gives you better judgment, in general, and it is not taught in the school systems.

“The beauty of what this team is doing is that it is something that we understand has tremendous impact. We want to bring it to every student, especially those in need.”

He said bringing multiple disciplines together through an arts curriculum will help teens develop and progress.

It is selling youth artwork on posters and hats — as well as accepting donations — on its website. Purchase items or make donations at https://shop.nationalyouthartmovement.org/