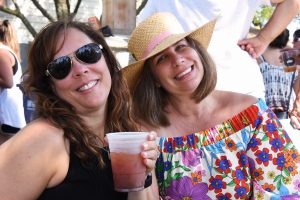 “This is an annual tradition,” said Sally Smith of Deerfield, who likes to come to the festival. Dear friends are (from left) Jane Trapani of Highwood and Sally Smith. (Photo by Karie Angell Luc/for Chronicle Media)

Mixologists from local restaurants shook up or caused a stir by stirring signature recipes and cocktail creations in an attempt to win the judges’ title of “Best Bloody Mary in the Midwest.” 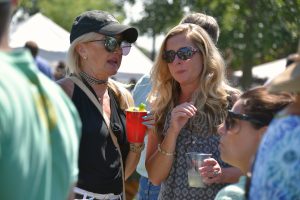 Sharing a moment are friends (from left) Laura Muraff of Highland Park, Jen May of Wheaton and Julie Crabtree of Highwood are friends. (Photo by Karie Angell Luc/for Chronicle Media)

“I love Bloody Mary Fest, I mean, what could be better than having all of these different Bloody Marys out on a beautiful day like this, it’s gorgeous,” said Eric Falberg of Highwood, president of Celebrate Highwood.

“Highwood has been known for their bars and restaurants for years and years,” Falberg said. 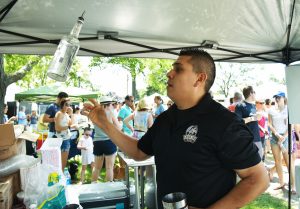 Tossing the vodka is part of the magic of Lucky Fish Deli of Highwood and Northbrook during the creation of a Bloody Mary. (Photo by Karie Angell Luc/for Chronicle Media)

“And people always say they have the best Bloody Mary so we decided to put them to the test.

“Come out here, expose yourself to how good you really are,” Falberg said with a smile.

“The Bloodies out here are really incredible, spectacular inventions.”

“Nothing tastes the same!”

People could enter the park for free and purchase tickets (adults of legal age) to obtain their choice of a Bloody Mary. 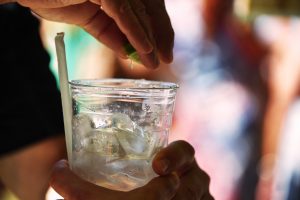 : This Bloody Mary starts with ice, vodka and then will be colored red with tomato juice concoction and circuses. (Photo by Karie Angell Luc/for Chronicle Media)

“I’m looking for a little kick,” said Angela Mitter of Northbrook, a patron who stood in line for a Bloody Mary made by Lucky Fish Deli of Northbrook and Highwood.

“I like horseradish and then, of course, if there’s something fun in the garnish, that’s an extra bonus,” Mitter said.

Some Bloody Mary cups were topped with beef sticks, thick bacon or shrimp on a skewer. Marinated cheese curds came with one recipe.

Celery salt was seen on cup rims with spices but secret ingredients were, well, secret. 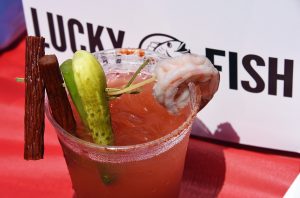 “The secret to our Bloody Mary really, is, we take our time,” said Greg Derman, owner of the Lake Bluff-based Maevery Public House.

“We actually brine our pickle juice,” said Derman of Lake Forest and a 1993 Lake Forest High School graduate. “Dill and there are some other herbs that we can’t really tell you about.”

The competition included a people’s choice award and awards for best garnish and most creative.

“We make our own mix,” said Francisco Gomez, manager of Scotty’s on Sheridan of Highwood.

“I think it’s great, it’s beautiful, tastes delicious,” he said, of his restaurant’s Bloody Mary, which came in an opaque cup. 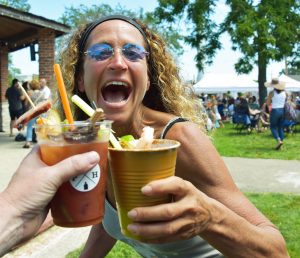 Seven celebrity judges sipped on entries starting at 2 p.m. before the 4:30 p.m. announcement at the gazebo.

The event does raise funds for Celebrate Highwood, a 501c3 organization that produces events to showcase Highwood.

“The goal is to build strong community spirit and establish Highwood as the prime entertainment destination for dining, festivals and events on the North Shore through inter-organizational collaboration, sharing resources and promoting the city as a wonderful place to live, eat and play,” according to a Celebrate Highwood mission statement. 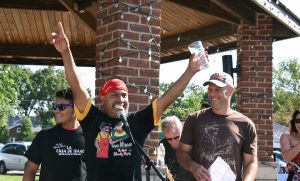 Isaac Nava of La Casa de Isaac, Kosher style Mexican cuisine of Highland Park, is happy his restaurant was recognized for most creative Bloody Mary. He’s holding up his award glass with etching on the bottom. (Photo by Karie Angell Luc/for Chronicle Media)

“It’s a volunteer-driven organization,” Falberg said. “We thank everyone who volunteers because it (Bloody Mary Fest) wouldn’t be a success.”

For Sally Smith of Deerfield, coming to Bloody Mary Fest is a priority to spend time with her dear friend Jane Trapani of Highwood.

“This is an annual tradition,” Smith said, who sat in the shade under a tree near the live music coming from the park’s gazebo.

There were runners up to each awards category. First place for judges’ choice and also for best garnish was Scotty’s on Sheridan of Highwood. 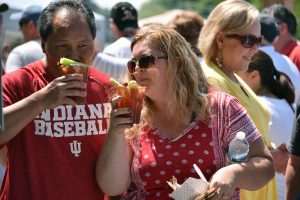 Most creative was La Casa de Isaac of Highland Park. The people’s choice award was presented to The Toadstool Pub of Highwood.