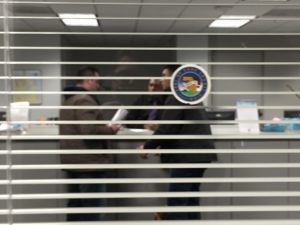 The Cook County Clerk’s offices are busy in early January of consolidated election years, as local candidates challenge each others’ paperwork — even for volunteer seats on park district, library and school district boards. The objection ritual takes place to determine who will appear on the ballots for the April 4, 2017 election.

This year the suburban Cook electoral board members will rule on petition challenges for 54 cases for school board candidates, 15 park district races a fire protection district and a township trustee. Most of the challenges this year are in the southwest suburbs, including school boards and park districts in Harvey, Blue Island, Calumet City, Hazel Crest and Matteson.

Upstairs on the fifth floor at 69 W. Washington St., Chicago, tempers sometimes bristle as candidates and their challengers sit side-by-side at a computer terminal with a county employee comparing the on-file signatures of registered voters with petitions. In the building’s lower level last week around 60 candidates and supporters met last week for “speed-date” hearings about 15 minutes long with electoral board members.

They’ll return this week to present evidence, hopefully showing that objections should be overruled. Some candidates appear with lawyers, others represent themselves.

“[Objecting to candidate petitions] is unique to Illinois, how adversarial it is,” said Maryam Judar of the non-partisan Elmhurst-based Citizen Advocacy Center at a workshop Nov. 29. “On one hand, the [election boards] are interested in limiting the number of candidates on the ballot. They want candidates who have demonstrated some initiative and have a modicum of support.”

For that reason, candidates must carefully follow rules about notarized and bound signature sheets, statements of economic interest and other paperwork.

But on the other hand, some incumbents have used candidate challenges to force their challengers from the ballot because of legal costs.

In 2015, for the last consolidated election, Clerk David Orr and State Sen. Dan Biss (D-Skokie) noted an excess of what they termed “frivolous lawsuits” aimed at driving up the legal bills for candidates. In the 2015 election, 99 school board candidate challenges were filed with the electoral board. Some challenges were overruled, but even then, threats to appeal electoral board rulings drove legal bills upwards of $5,000 for some candidates, who ended up withdrawing from the ballot.

The Cook County Board of Elections and Biss worked together to propose a bill (SB 1254) that would allow candidates to overcome “harmless errors.” Bill language said errors that were “minor or technical in nature” should not be considered defects that would “render the petition invalid.” However, the General Assembly did not pass the bill. Biss did not respond to requests for an update before press time.

Since that time, Orr’s office has attempted to make ballot access easier for ordinary people to run for office. With more than 60 percent of Cook County local-level races uncontested, and many boards lacking any candidate at all to run, the clerk’s office issued a “Running for Office” online starter kit with pre-printed forms that would help prevent simple errors.

“Clerk Orr still supports cleaning up the petition challenge process so that challenges to paperwork errors that don’t affect the integrity of the election process can be tossed out,” said Clerk Spokesman James Scalzitti.

“Legitimate candidates who run for local office because they sincerely want to do good for their communities [shouldn’t] have to jump through unnecessary hoops just to be on the ballot.”

The Clerk’s office will be keeping an eye out for any “frivolous” challenges that may be presented at this year’s hearings, Scalzitti added.

All objections must be cleared up within three weeks. The electoral board will certify the ballots by Jan. 26.