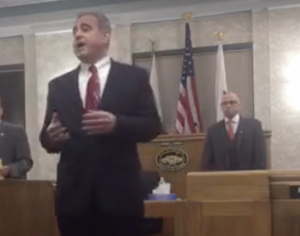 In the era of Donald Trump, the nation may be swinging to the right, but in local Cook County politics, some local campaigns are finding traction with a “progressive” agenda.

In one of the handful of Feb. 28 Cook County primary races, two-term incumbent Berwyn Mayor Robert “Bobby” Lovero and his “Team Lovero” are facing a 16-member slate of candidates calling themselves “Berwyn United.”

The group got some organizing help from 32nd Ward Chicago Ald. Scott Waguespack, head of the Progressive Caucus in the Chicago City Council. Waguespack has roots in Berwyn, as he served as Berwyn town spokesperson under the previous Mayor Michael O’Connor’s administration.

The ticket is headed by two of Lovero’s most outspoken critics, Ald. Theodore “Teddy” Polashek (8th Ward), who is running for mayor and 3rd Ward Ald. Marge Paul, who is running for the clerk’s office. A third alderman, Robert Fejt (4th Ward), is also on the ticket. Polashek and Fejt are both firemen, Paul is a lawyer.

The other candidates are relative political newbies, but the team is getting some sophisticated help.

“I have worked a lot of campaigns where strong grassroots organizations have overcome the Chicago political machine,” Reynolds said.

Old school machine-style governing is what Berwyn United candidates said they were opposing at a crowded Feb. 2 candidate forum in The Berwyn Municipal Building.

“We hand out contracts to friends and family for city services. We take campaign contributions one day and then we hire them the next day as a contractor or a city vendor,” said Polashek. “We run an inefficient pay-to-play operation that insures we pay more for services and get less of what we need.”

Lovero said the city had a fund surplus of $10 million. But Berwyn has borrowed during the years, following the great recession. In 2015, the city borrowed $30.5 million to fill up the firefighter and police pension funds. The city’s total debt was $175 million in 2015, up from $90.2 million in 2009 when Lovero took office, according to the city audit.

Lovero pointed out at the forum that his parents were both Italian and Mexican, so he was already representing Hispanics in Berwyn.

Even though the candidates have progressive campaign advice, the candidate forum was old-school union Democrat.

Perez, a former U.S. Marine and union painter, had his candidacy challenged because of irregular use in nominating papers of his legal name, Edgar Jaime Garcia Perez.

Things got heated when Polashek and Perez were asked why Perez hired election attorneys Odelson & Sterk to fight his name challenge in circuit court. Odelson & Sterk are resented by firefighters in neighboring North Riverside for spearheading a plan to privatize the fire department. The firm donated $1,000 to the Berwyn United campaign.

“How do you defend yourself in using Odelson & Sterk, one of the biggest union-busting law firms there are?” a member of the crowd asked.

“Don’t come here and tell me that I don’t have a badge of honor that I’m a union man!” Polashek said. “I stand by any blue-collar person.”

Local Berwynites complained about the number of video gambling terminals in town. Berwyn has around 60 establishments with video gambling in a 4-square-mile town, according to the Illinois Gaming Board website. Most detested are the stand-alone “gaming lounges,” which have taken up empty storefronts, sometimes two to a block. Owners of the gambling companies are generous donors to Lovero’s campaign committee.

The City Council passed a law capping the casino parlor licenses to 15, said Lovero, who also serves as liquor commissioner (as do many suburban Cook mayors). He also said establishments had to wait for one year to get a video gambling license.

“Those machines bring in $40,000 a month and it helps us offset the cost of fire, police, public works, and the services the city does provide.” he said.

Citizens also complained about the fines collected by Berwyn’s red-light cameras, which were shown in recent media accounts to collect the highest amount of revenue in the state. Berwyn’s FY 2015 budget projected $2 million in revenue from red-light camera fines.

Lovero has campaigned on growth of new businesses in the city and the rebound of the housing crash, which hit Berwyn hard. Berwyn was rated most profitable for home flippers in October 2015, averaging 120 percent profits. As a real estate attorney, Lovero has been criticized for using his influence to profit from housing development and sales. Lovero’s 2016 salary from the City of Berwyn was listed on the city website at $50,000, plus $27,000 for health and benefits.

Lovero did not respond by press time to a request for comments.

Lovero said the city was planning a large infrastructure makeover of the sewer lines in the “Depot District” to help prevent flooding.

Second Ward Challenger Jose Ramirez said he and his husband closed their seven-year-old ice cream shop in the Depot District because they thought they could not survive the proposed multi-year construction project.

“It’s been three years and that [construction] never happened. Now where our shop was on either side there is a stand-alone gambling place,” Ramirez said.

The BU slate includes six candidates for township officials, some newbies and some who have run in the past. The campaign also has the tacit support of State Rep. Lisa Hernandez (D-Cicero).

Turnout in Berwyn municipal elections has fluctuated from as many as 10,000 to as few as 3,000 in primaries and general “consolidated” elections, said Reynolds.

“The No. 1 predictor of turnout is many candidates running in competitive races. Folks are excited about this election,” she said.