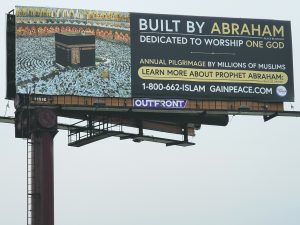 The biggest part of GainPeace’s campaign is a billboard that went up near O’Hare Airport. (Photo by Igor Studenkov/for Chronicle Media)

For the past 12 years, Oakbrook Terrace-based GainPeace program has been working to educate non-Muslims about Islam, combat misconceptions about Islam and help newly converted Muslims integrate into the community. The outreach to the community is a big part of it.

Earlier this month, GainPeace launched its latest campaign. “Abraham — friend of God” campaign aims to draw the attention to the common traditions shared between Judaism, Christianity and Islam, encourage residents to learn more about Abraham’s teachings from Muslim perspective and highlight the season of the Muslim pilgrimage of Mecca this month.

It is designed to draw attention to hajj — a pilgrimage to Mecca that include visits to a holy site that Muslims believe was built by Abraham.

The biggest part of the campaign is the billboard that went up near O’Hare Airport. GainPeace is also sharing free books and brochures. According to the program’s officials, they’ve already gotten some calls and, so far, the interactions have been positive.

Abraham plays an important role in Judaism, Christianity and Islam, as well several other, less widely practiced faiths. The faiths regard him as a major religious figure, though they differ somewhat on the reasons why.

Muslims believe that Abraham is one of the prophets and messengers of God and the ancestor of most prophets that came after him, including Muhammad. They also believe that it was Abraham who established hajj traditions and built the Kaaba, Islam’s most sacred site.

Making a pilgrimage to Mecca is one of the five pillars of Islamic faith, something that all able-bodied Muslims must complete during the lifetimes. During the first day of the pilgrimage, pilgrims walk seven times counterclockwise around the Kaaba. The whole pilgrimage lasts 13 days, and must take place during the final month of the Islamic calendar. Because it’s based on lunar cycles, the start and end dates vary on the Gregorian calendar every year. This year, the start date fell on Aug. 10. 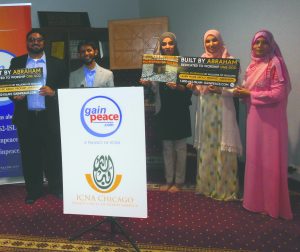 GainPeace is part of the Islamic Circle of North America, a New York City-based Islamic education organization whose Chicago chapter shares the building with the program’s offices. Dr. Sabeel Ahmed, the group’s executive director, explained that GainPeace has done billboard campaigns before, but this was the first time they’ve done one centered on Abraham.

The billboard is located in Schiller Park, at Illinois Tri-State Tollway, slightly south of the now-demolished O’Hare Oasis Travel Plaza. It went up on Aug. 13 and will remain up until Sept. 15. The billboard has a photo of the pilgrims circling the Kaaba and a message that the site was “built by Abraham” and “dedicated to worship one God.” Those who wish to learn more about Abraham are encouraged to visit GainPeace’s website, or call 800-622-ISLAM

Ahmed said that they’ve already gotten a few calls, and all of them were positive. He added that, as he saw it, most of religious hatred and mistrust stems from emphasis on differences between religions, while bonding over things they have in common builds bridges.

“We find out there’s so many commonalities we have with each other, and we hope and pray that we work on those commonalities, we can establish a society that is based on peace and justice for us all,” Ahmed said. “When people have misconceptions about each, it makes people look at each other with suspicion. Hopefully, the campaign of this nature will unite people.” 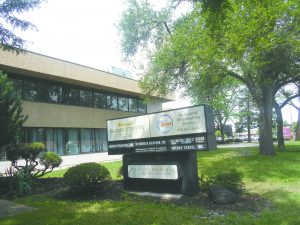 Islamic Center of Oakbrook Terrace (background) is home to a mosque, a school and GainPeace education and outreach program. (Photo by Igor Studenkov/for Chronicle Media)

Kiran Malik, a GainPeace volunteer who appeared in last year’s campaign, which centered on Islamic views on modest dress, said that Abraham was a great figure to reinforce that message.

“GainPeace hopes that our current campaign will unite people of all faiths [through] the life and the legacy of Prophet Abraham, Peace Be Upon Him,” she said.

Ahmed explained that, with this campaign, they hoped to educate their non-Muslim neighbors about “the wonderful pilgrimage to Mecca.”

Beena Farid, who went on her pilgrimage in 2006, noted that all pilgrims must wear simple white clothing to show that they are all equal in the eyes of God — and seeing the differences erased moved her.

Aamer Abdul-Jaleel, a GainPeace volunteer who works as a principal for technology management operations at AT&T, recently returned from his hajj. Seeing Muslims for all over the world come together moved him profoundly.

“During this sacred and beautiful journey, every Muslim from around the globe follows footsteps for Prophet Abraham and his family,” Abdul-Jaleel said. “[I thought] — why does nobody talk about the commonalities and shared beliefs of all other faiths, and only differences are highlighted, spewing hate.”

Abdul-Jaleel said that following the footsteps of a prophet who lived before the establishment of three major faiths was “very overwhelming.”

“It’s an inspirational recharge,” he said. “It’s as close to God as I can get. That’s my personal view.”