It didn’t rain on his parade on April 10 for Wyatt Hill, 2, of Northbrook.

The tot received quite the blue-sky birthday party surprise with a social distancing drive-by parade by his hometown fire and police first responders. 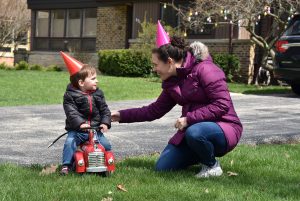 Matt is Matt Hill, Wyatt’s father. The Hill family stepped outside of their east Northbrook home on Good Friday at 12:20 p.m. on a sunny day, waiting for the 12:30 parade to arrive.

Northbrook fire and police did not disappoint this little boy who waited on a red scooter with bell along his driveway.

With flashing lights and sirens, the parade stopped in front of Wyatt’s residence.

Dave Mohry, fire inspector, kept his social distance during COVID-19 by staying in the engine.

With a wave to Wyatt, and a “Happy Birthday,” Mohry held a bright pink sign handmade and drawn by Mohry’s kids. 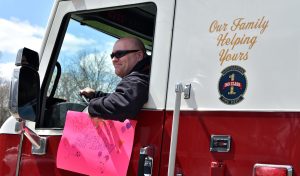 Dave Mohry, fire inspector, has his hand on a steering wheel of the reserve engine. Mohry held a bright pink sign handmade and drawn by his kids. (Photo by Karie Angell Luc/for Chronicle Media)

“It’s really cool, he took that upon himself,” said Kevin Frangiamore, fire marshal, complimenting the parent in Mohry to collaborate with family to produce the birthday sign.

The sign stays with Mohry as he completes his birthday drive routes. Requests accommodate Northbrook children ages 2 to 18.

“This is something that we are doing because of COVID-19 to help celebrate birthdays for kids around Northbrook,” Frangiamore said. “It’s a really small thing, but it gives them something to look forward to and a little happiness in these times.”

Frangiamore said his department has scheduled about 70 birthday drive-by parades with likely more until the first few weeks of May.

The department uses a reserve fire engine and Frangiamore said, “We are only doing it during the week from around 11 a.m. to noon, unless we have too many requests. 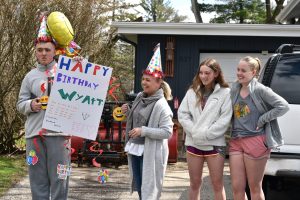 “We are going to do this for as long as the Governor has the state in shelter in place.

“We have had as many as 10 (birthday parades) in one day, which means our driver was out for almost two hours straight,” Frangiamore said.

Bittersweet Drive neighbors came out of their homes for Wyatt’s special occasion.

“In the midst of sheltering in place and cooler weather temps, it was really refreshing to see neighbors outside again, to witness the joy in the birthday boy’s eyes and to thank the responders who are keeping us all safe,” said Michelle Vandergraaf Weiss, a Northbrook neighbor.

“What a great town we live in,” said Sue Hall Sieber, also a neighbor.

“I love our Bittersweet neighborhood.”

“Thanks guys,” said Matt Hill, in a shout-out that could be overhead by neighbors. 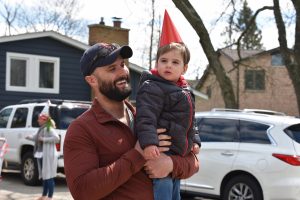 “It’s literally the best neighborhood in the world,” said Julie Ann Hill, who notified neighbors about the parade, “that this was happening. “I’m very lucky,” to be a part of Northbrook.

Frangiamore said that when people contact him to request a Northbrook birthday drive-by, he tells them about opportunities to donate to the Northfield Township Food Pantry in Glenview. The suggested donation is $15.

“Someone gave $250, I was pretty blown away by that, that was amazing,” Frangiamore said.

“I couldn’t believe it.”

But, “Any amount that they can afford would be great, it’s tough times,” Frangiamore said.

On the side of Friday’s Northbrook red fire engine were the words, “Our Family Helping Yours.”

“That’s been our slogan for a long time, ‘Our Family Helping Yours,’” Frangiamore said. “We are a big fire family here and we’re here to help the families of Northbrook.”

Residents can request a birthday visit for youth by contacting Frangiamore at Kevin.Frangiamore@northbrook.il.us or by calling his office phone at 847-664-4501.

“It’s simple, the kids love it,” Frangiamore said. “It’s something to bring a little sunshine.”