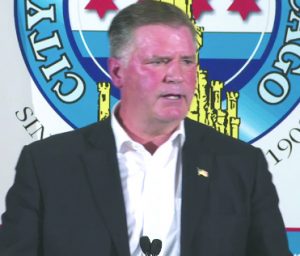 State Senate Republican Leader Bill Brady talks to members of the City Club of Chicago. Of Illinois Republicans’ super minority in both the state House and Senate, Brady said, “We came to the table. We didn’t seek to overturn it; and to find common ground.” (Photo from City Club video)

Coming into this legislative session as a super minority in both the state House and Senate (meaning Democrats had veto-proof majorities in both chambers), some Illinois Republican legislators saw being obstructionists as the only way for their voices to be heard.

‘There were people in our own party who thought that (House Republican) Leader (Jim) Durkin and myself and the caucuses we proudly represent should have taken a fire-and-brimstone approach,” Senate Republican Leader Bill Brady said. “Maybe we should have said, ‘Oh, hell with you, Democrats. We’re going to fight everything. We’re not going to cooperate or try to work.’”

He said by doing so Republicans would have missed having a voice in too many big issues facing the state.

“We had to at least try to work in a bipartisan fashion on areas we could agree, to advance the interests in this state,” Brady told a June 18 gathering of the City Club of Chicago. “… We really did know that we needed to accomplish some things, hopefully collectively.”

“We came to the table. We didn’t seek to overturn it; and to find common ground,” Brady said.

He said Republicans worked hard to make the state better and played a role in that process. The Senate Republican leader since 2017 said his party was not afraid to speak up when necessary, like when Gov. J.B. Priztker had proposed an $800 million pension holiday, kicking that required payment down the road for future leaders to address. That idea was eventually scrapped.

He said Republicans also could not support increasing the minimum wage by government fiat, something that could cost the state jobs when employers look at their bottom line. Republicans also couldn’t support the governor’s proposal for legalized recreational marijuana and the proposal to change the Illinois Constitution for a graduated income tax rate. He said other things Republicans would not support were a budget that secretly included legislative pay raises and the state’s “extreme abortion policy.”

The state senator of the 44th District since 2002 said Republicans knew that some type of capital bill had to be put forward to improve the state’s roads and bridges.

“Illinois is in desperate need of a reinvestment in our infrastructure,” Brady said. “We benefit from the geographic presence that no other state has, not to mention our natural resources, but if we can’t transport those resources economically and efficiently — not to mention provide for the public safety of our citizens as they travel throughout this state — then we’re missing a great opportunity.”

The Bloomington Republican, who served as state representative for the 88th District from 1993-2001, said the lockbox amendment to the Illinois Constitution passed a few years ago ensures that the funds earmarked for infrastructure improvements will go to roads, bridges and other projects, and not swept away to other funds as governors had done in the past.

“The people of the state of Illinois knew they could find integrity in the fact that their motor fuel tax dollars would go to actually improve their roads, their rail, their air, their ports and so forth,” Brady said.