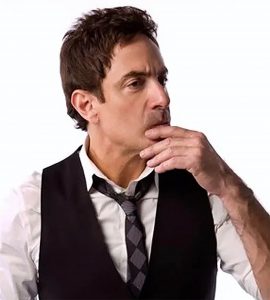 Radio personality Jonathon Brandmeier stands on equipment in his home studio. Brandmeier is back on the air, doing a live podcast Saturday mornings. (Provided photo)

Johnny B is back!

Chicago area radio personality Jonathon Brandmeier is back on the air and doing it his way. Brandmeier, who ruled the local airwaves during a 14-year run at WLUP-FM in the 1980s and ’90s, is streaming a live podcast on Saturday mornings. The podcast of the show, which, at least for now, is commercial-free, includes his longtime sidekick Buzz Kilman. “The Brandmeier Showcast,” which has been on the air since April, is available on podcast platforms.

Brandmeier, who started on the radio at age 15 in his hometown of Fond du Lac, Wisconsin, has worked in Milwaukee, Phoenix and Los Angeles, along with Chicago.

“Wherever I went, I never thought to myself, ‘Well, I’ve got to get going here so I can … what? Make money? I just did it because I enjoyed it and that’s exactly where I’m at right now,” Brandmeier said.

Brandmeier said he loves the unfiltered liberty he has right now with the live show/podcast and does not see himself going back to a commercial radio station anytime soon.

Listeners are thrilled to have the 2018 inductee into the National Radio Hall of Fame back on the airwaves.

“If I had known that all it would take was a worldwide pandemic to get you guys back on the air, I would have been eating bats breakfast, lunch and dinner nonstop,” listener Dan Blum said in an email that Brandmeier shared with Chronicle Media.

“It’s surprising to me … It’s just humbling. I go ‘What? You like this? You were waiting for me?’ I didn’t know,” Brandmeier said.

While “The King of Chicago Mornings” during his time with WLUP, his band “The Leisure Suits” became a hot ticket as well.

“Very, very busy,” Brandmeier said of the WLUP and Leisure Suits fame. “Probably too much of a good time at one time, but it was pretty, pretty, pretty good.”

In an interview with Chronicle Media, Brandmeier talked about everything from his return to the airwaves to not being cognizant of the magnitude of things in the moment.

On having a radio board in his house

JB: When you have your own board in your house, you can play with anything you want. People are like

whose doing all those sounds. It’s my fingers doing it. I do all my calls from the board so I can just get back in that groove with my hands and my head. It’s like playing the piano. You don’t look at it now. You just start hitting it and my friends will go like, ‘Dude, would you knock it off with the sound effects. I’m trying to talk.’ That’s just the way I look at things. I look at things in a weird and funny way … Yeah, I get serious with people. I mean, sure, of course, but I’m trying to always be positive about things. You know, Monty Python, ‘Always look on the bright side of life.’ That’s what I’m talking about.

On being back on the air

JB: If you’re not having fun, what’s the purpose? Especially now, when you see what’s going on, maybe this is the right time to come out and have fun again. It seems to me it’s really resonating with people. People are just really excited about it … I’m here at my house; Buzz is at his house; Jimmy Mac (McInerney), keeper of the archives, is at his house. He put stuff together for replays. I do a lot of editing now, video now, probably a good idea that it happened this way because I just kind of had to do everything. I just learned to do it. Fantastic for me that I’m doing this.

JB: They’re learning they can do a lot of things without people. If you think radio went downhill in 2008 with that recession, you ain’t seen nothing yet. I’m not Kreskin. I’m looking at the world around me. Hubbard, Cumulus, iHeart, they’ve all cut staff 40 percent, 50 percent. C’mon. What do you think’s going to happen? Once they get used to it, that’s how (they’ll do it). Let’s just say I picked a bad time to get and start my own business. Smart! Unbelievable! 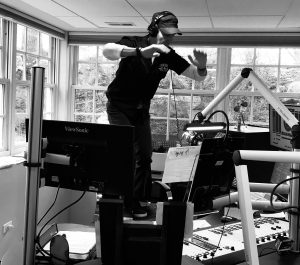 Jonathon Brandmeier ruled the local airwaves during a 14-year run at WLUP-FM in the 1980s and ’90s. (Facebook photo)

On reuniting with Buzz

JB: Buzz and I, when we were testing the equipment, it was instantaneous. The fact that I can hit a button and put Buzz in my earphones with one click and we start talking … It was magic from the very beginning

Episode 1 was testing. We were just playing around in the studio and then this thing called COVID-19 took over and the rest is history. What does John Lennon say, and I love this line because it makes perfect sense, ‘Life is what happens when you’re busy making other plans.’ It doesn’t’ matter what plan you have.

On not getting star struck

JB: (The Leisure Suits) sang the national anthem for the Bulls-Knicks Game 6 (1993). The Leisure suits did the anthem for the Cubs and White Sox. When I’m doing it, I’m not really thinking how cool it was. It’s not until you look back on it and you’re like ‘Oh, God. That was Michael Jordan. Oh, my God.’ He was standing right there while we were singing. And you know you’re in it. In this business, in this world I’ve been in, I never really think about it because you’re in it. You’re doing it, but then I’ll go ‘Oh, wow, I forgot. I talked to Michael Jordan.’

JB: We had been building a studio. We’re just trying to figure out what to do with it. We had no idea what to do with it. We built it because radio people would tell us ‘We’re going to put a studio together’ and whatever it was; and everybody just lied. I swear to God, I just woke up one day and said, ‘I’ve got to take control of this situation.’ Everyone we talked to is like, ‘It’s going to take us a while to do the studio’ or ‘We’re going to build you a studio.’ I could say some names, but I really don’t want to. It’s just not my nature. There are some people who promised me things. We would have been on two years ago. They said they were going to do some things and they didn’t do them. We’d go meet different people. ‘Hey, you should be doing this. You should be doing that. We want to do this with you. We want to bring you into this. You should be the leader of the entertainment talk network, blah, blah, blah’. It always came back to why do I keep putting myself in other people’s hands? Let me just do it myself. Let me just build a studio and now we are in control.

The Brandmeier Showcast is streamed live at 10 a.m. Saturdays at https://brandmeiershow.com/live/. The show podcast is available Mondays on podcast platforms.

Next week: Doing a podcast and connecting with his audience