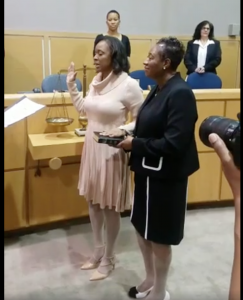 Katrina Thompson was installed as the first female African-American mayor of the Village of Broadview May 1.

Thompson won a five-way race to replace former mayor Sherman Jones, who was term-limited by voters to no longer serve as mayor, but ran again as village trustee.

Thompson also serves as a trustee of the Broadview Public Library and now finds herself on both sides of a two-year legal dispute between the library and the village.

“I am not sure if I can remain on the library board, and I’m leaning towards stepping down,” Thompson said. Thompson formerly served as executive director for the Broadview Park District. She also currently serves as a community member on the Proviso Township High School District 209 Financial Oversight Panel and the West Humboldt Park Development Council.

Cook County Chancery Court Judge Diane Hansen pushed forward a May 4 hearing date to May 31 for the library lawsuit, in which the library has demanded $1.2 million from the village for funds lost over delays on the construction of a 5,000-square-foot addition approved by voters in 2012 in a $4.2 million referendum. The suit alleges that village employees in the building department sabotaged and delayed the project because then-Mayor Jones wanted the library to build on another site partnering with his hand-picked developers. The library filed a motion for sanctions and a motion for summary judgment. Taxpayers were footing the bill for three different law firms in the case after a group of village trustees hired “legislative counsel” to intervene in the settlement discussions.

Mayor Thompson’s first board meeting May 1 cut loose the firm of Ancel Glink, whose lawyers were representing the trustees, in a four-to-three vote.

But the village also approved agreements with several new law firms for various duties. Berwyn-based Del Galdo Law Group was hired as a primary village attorney paid $195 per hour. Members of Del Galdo assisted Thompson with her transition team, she said last week. The board also approved an agreement with the Palos Heights firm Montana and Welch for special counsel for economic development and the zoning board, to be paid $195 per hour. The village agreed to hire Proviso attorney Michael Castaldo for adjudication hearings, and Maywood lawyer Joe Ponsetto for village prosecutor. La Grange-based Fornaro Law will continue to represent the village.

Fornaro has represented the village for many years in a decade-long First Amendment lawsuit filed against the village in 2007 by Chicago Joe’s Tea Room, LLC, a strip club that tried to open in Broadview. The parties were in mediation earlier this spring. Fornaro Law was paid $307,000 in fiscal year 2016, according to the annual treasurer’s report.

Even if she steps down from the library board, Thompson may have to recuse herself from voting on any settlement with the library as mayor, she observed.

“I will continue to be supportive of the library board so they can continue to do great things for the village,” she said.

Thompson said the updating of the village website was a priority, “within 30 to 45 days.”