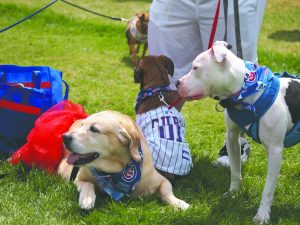 Daisy (left), Jedi (center) and Chip, dogs of Shane Geers of Joliet, take a break from the activities decked out in their Cubs gear. (Photo by Kevin Beese/Chronicle Media)

Pepper, the dog of Jay and Audra Vandoorn, plopped down just outside the agility course at the Anti-Cruelty Society’s Bark in the Park.

Having completed the course with his owners, the canine was, well, dog-tired. (SLIDESHOW: Bark in the Park at Soldier Field

“He did the 5K too and he has little legs,” Jay Vandoorn laughed.

“It was our first time doing an agility course. It was fun,” Audra said.

Pepper and more than 1,100 other dogs had their day May 18 as the Anti-Cruelty Society celebrated its 25th Bark in the Park with events on the Stadium Green at Soldier Field.

Canines and their owners spent the day participating in events, including the agility course, a 5-kilometer walk, dog massages, professional demonstrations and a beer tent.

It was the fourth time Bark in the Park, the Anti-Cruelty Society’s largest fundraiser of the year, was held at the Stadium Green outside Chicago’s Soldier Field. It was lightyears from the organization’s first fundraiser, which morphed into Bark in the Park. 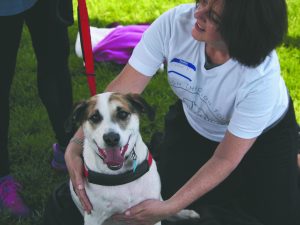 Sue Yanahan of Canis Bodyworks gives a K-9 sports massage to Fred during the Anti-Cruelty Society’s 25th Bark in the Park held May 18 on the Stadium Green at Soldier Field in Chicago. (Photo by Kevin Beese/Chronicle Media)

“We walked around the block of our facility on Grand Avenue,” Jennifer GoodSmith, the Anti-Cruelty Society’s vice president of marketing and communications, said of the first fundraiser.

Twenty-five years later, participants stood by as their four-legged friends got sports massages from members of Canis Bodyworks.

“Massage gets their muscles loose,” Sue Yanahan said as she worked on Fred.

Will Schulenberg of Chicago took Zoey, his pit bull mix, through the agility course, loving every minute of it.

“It was our first time doing an agility course,” Schulenberg said. “It was an amazing thing to go through. I would do it again.”

GoodSmith said the day is important not just for the Anti-Cruelty Society, but for dog owners as well.

“It’s an opportunity for dog owners to get outside and walk around, spending time doing activities with their pet,” GoodSmith said. 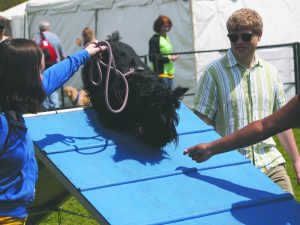 Pepper makes his way down part of the agility course at Bark in the Park. (Photo by Kevin Beese/Chronicle Media)

Shane Geers of Joliet said she comes to the event every year with her pets.

“I love it,” she said, holding four dog leashes.