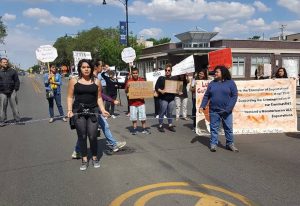 Chicago police took into custody five protesters who chained themselves across Fullerton Avenue in front of the offices of Cong. Luis Gutierrez the morning of June 30.

Four women and one minor girl were charged with ordinance violations for blocking traffic and released by Chicago Police.

About 100 supporters with signs complained that the 4th District congressman was not using his influence as a member of the 15-member Democratic National Convention drafting committee to adequately stand up for immigrants facing deportation. Gutierrez was appointed to the national committee by Democratic presidential candidate Hillary Clinton.

“The congressman is in a unique and powerful position right now,” said immigration lawyer Mony Ruiz-Velasco, executive director of Proyecto Accion de los Suburbios del oueste (P.A.S.O.). Ruiz-Velasco was one of the women arrested. “[Gutierrez] is helping to shape and form the policy for the DNC on immigration.” 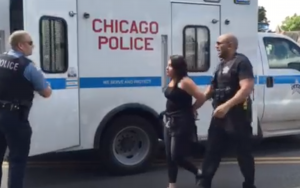 Protester Maria, 13, is brought to a paddy wagon in handcuffs by Chicago police officers. (Chronicle Media)

Ruiz-Velasco said Gutierrez did not support vulnerable undocumented immigrants who were arrested on minor charges and faced deportation.

“They are undocumented and unafraid,” she said.

Among the protestors arrested was 13-year-old Maria, of Bolingbrook, whose father Jose Juan Federico Moreno sought sanctuary in a Hyde Park church in April after losing multiple appeals to avoid deportation.

Moreno, 35, of Bolingbrook was convicted of aggravated DUI in 2009, Ruiz-Velasco said. The charges were bumped up to a felony because he was arrested without a driver’s license, she said.

Moreno appealed his deportation as sole-breadwinner of the family, which included five U.S.-born children, ages two to 13. Moreno exhausted his appeals and was ordered by the Dept. of Homeland Security Immigrant and Customs Enforcement (ICE) to “self-deport” in April, when he holed-up in the University Church for sanctuary.

“For the last seven years ICE has been trying to break me apart from my family,” Moreno said in April. ICE issued a statement in saying Moreno was considered an “immigrant fugitive.” 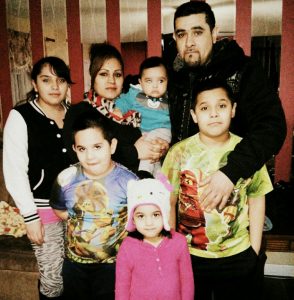 Jose Juan Moreno, of Bolingbrook, and his family members. Moreno has sought sanctuary in a South Side Chicago church for three months. Immigration officials consider him an “immigrant fugitive.” (Courtesy: Organized Communities Against Deportations Facebook)

Immigrants in the U.S. without legal resident status have become more insecure after a June 23 Supreme Court ruling. A four-to-four tied vote by the court threw out a 2012 executive order by President Barack Obama, which aimed at protecting families from being separated. The Deferred Action for Parents of Americans (DAPA) order said that parents of U.S. citizens who had a clean record could apply for limited protections from deportation. DAPA was challenged as overstepping the bounds of the executive branch in a lawsuit brought by the state of Texas and others.

It is possible that Moreno would have qualified for DAPA, Ruiz-Velasco said. She said his legal representation after his arrest did not take adequate steps to protect his immigration rights.

“DAPA didn’t pass, and without these protections there are more examples of criminalization of our immigrant community,” she said. “For [Moreno], the consequences are severe if he’s deported he can’t come back with this family.”

“[Gutierrez] claims to be the self-appointed champion of immigrants, but unless he changes his position on deportation he doesn’t deserve that title,” Ruiz-Velasco said.

Jose Juan Moreno’s wife, Berenice Alonzo, who also does not have U.S. resident status, spoke to protesters in Spanish in front of Gutierrez’s office saying she her life without her husband was difficult because she had to “play the role of the father who is not at home,” she said.

“My husband went to court and paid his fine seven years ago,” Alonzo said. “A flag was raised and ICE came to our house because they have quotas,” she said. “No one should be taken from his family because of a single DUI.”

PASO member Estela Vera said Gutierrez had announced publically that immigrants with any criminal background should not be spared from deportation.

“Congressman Gutierrez should stop dividing the community between good immigrants and bad,” she said.

Around 10:15 a.m. Chicago 14th District police dispatchers broadcast a call for officers in the 3200 block of W. Fullerton.

“The Congressman’s office is calling. They have protesters outside the office,” the dispatcher relayed. “It was peaceful, but now citizens are calling and saying protesters are blocking the street.”

Gutierrez’s office did not respond to a call for comment by press time.

Several CTA buses came to a halt east- and westbound on Fullerton.

“I’m going to have to walk to work,” said one passenger exiting the bus, who declined to give his name. As protesters chanted and car horns began to sound, officers with a bolt-cutter clipped the chain linking the protesters, handcuffed the five women and led them to a waiting CPD paddy wagon.

As the teenager was loaded into the wagon in handcuffs, supporters and Maria’s mother called to her, “It’s OK, Maria. We have your back Maria.”