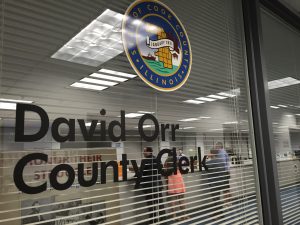 A citizen-led referendum effort to ban video gambling in Forest Park ran into hurdles last week when about one-third of the 2,900 voter signatures collected on petitions to put it on the ballot were challenged.

Lawyers for the challengers and referendum organizers met Aug. 24 before the convened three-person Forest Park Election Board, which consists of the mayor, village clerk and longest-elected village commissioner.

A brother of two bar owners, one a former village commissioner, challenged about 1,000 signatures collected by 34 volunteers in the town of 12,000 residents.

“That was to be expected,” said Realtor and Forest Park native Patrick Jacknow, whose family has born most of the cost of hiring election lawyers to defend the petitions. Jacknow said the referendum committee has spent close to $5,000, the point at which it will have to file a report with the state. The citizen group is represented by the Chicago election law firm Ancel, Glink, Diamond, Bush, DiCianni & Krafthefer, P.C.

“Gambling would bring our town in a reverse motion back to the 1980s and 70s. There weren’t machines, but there was plenty of gambling,” Jacknow said.

Access to the ballot for this special type of binding referendum is steep. Citizens must present valid signatures from one-fourth of the registered voters in the municipality, gaming laws say.

Organizers in the anti-video gambling group say the “magic number” of signatures needed is 2,304, based on the number of registered voters (8,800) listed by the Cook County Clerk in Forest Park after the April, 2016 election. But Evergreen Park election lawyers Odeson & Sterk — representing the petition challengers — have asserted that there are an additional 900 “inactive” voters who must also be counted, bringing the mandatory signature number up to 2,542, say organizers.

With about half the challenged signatures overruled by the Cook County Clerk’s office, organizers worry they will just miss the mark.

“An inactive voter is someone whose voter mailings have been returned by the Post Office indicating they have moved,” emailed Nick Shields, spokesperson for the Cook County Clerk’s Office. “Consequentially, we have reason to believe that they no longer reside where they are registered, meaning they shouldn’t be registered to vote. But we don’t simply cancel their registration. They go into ‘inactive’ status, meaning they can vote if they appear at their polling place and produce ID to prove that they still live at the same address.”

Meanwhile, bar owners, who seek to legalize video gambling in town, are grumbling the petitions were signed under false pretenses. Marty Sorice Sr., who owns six taverns in the town, says some of his patrons signed petitions thinking they would be able to vote pro-video gambling.

“I can’t tell you how many people have approached me who thought they were signing a petition that would bring forth a yes or no vote on video gaming. Those people feel they were hoodwinked,” Sorice said.

If it survives the challenge, the wording on the Nov. 8 ballot will read:

“Shall video gaming be prohibited in the Village of Forest Park, Illinois? Yes__ No__.” Legal requirements in the Illinois Gaming Act state the exact language of the referendum.

Sorice and other bar owners claim they need video gambling to remain competitive with neighboring towns. Berwyn, North Riverside and Brookfield allow video gambling, which Forest Park bar owners claim is leading to stolen customers. Berwyn is among the Illinois cities with the highest concentration of video poker and slot terminals in the state, with about 240 machines in 57 establishments in four square miles.

Forest Park bar owners believe they can earn between $1,000 to $5,000 per month from video gambling. Sorice and his wife own three other bars in Fox Lake which brought in around $325,000 from 15 terminals from July 2015 to July 2016, according to the Illinois Gaming Board website. Bar owners receive 35 percent of money wagered and lost at up to five state-sponsored terminals per location. Thirty-five percent goes to the terminal operators and 25 percent goes to the state of Illinois. The local municipality receives 5 percent of gaming profits.

“That’s money I could use to clean up my limestone in front of my business and replace the awnings,” said Mark Hosty, part owner of Healy’s West Side, on Madison Street, the main commercial strip in town. Hosty is a former village commissioner and brother of John Hosty, who filed the petition challenges. “That would make the town more attractive and bring more foot traffic to the street,” he said.

But Noel Eberline, co-owner of Yearbook, a design and mid-century antique shop, said video gambling would change the character of the street, where small businesses, boutiques and restaurants have held on despite the recession and a drop in foot traffic.

“It’s not exclusively the bar owners who are hurting,” Eberline added.

“Business owners on the street want to move forward,” said Jacknow. “If you want to hang your hat on video gambling and without it you can’t make it, then you’re not going to make it, I guess.”

The state of Illinois legalized video gambling in 2009. It is still not permitted in the City of Chicago and almost 40 other municipalities in Illinois, according to the Illinois Gaming Board website.

Voters in Forest Park already voted to keep video gambling out of town. In a nonbinding referendum in 2013, voters supported the ban by 2-to-1.

“The problem with a nonbinding referendum is that while it’s morally binding, officials can say ‘screw that, I can do what I want,’” said Stan Zegel, former publisher of the Winfield Register. Winfield (population of 10,000) is among the only towns in Illinois to pass a binding referendum banning video gambling. The voters approved the citizen-led referendum in 2012.

“A binding referendum is a ‘ratchet,’ it only works one way, because the statute provides for the people to vote to ban it, but there’s no provision in the law to unban it,” Zegel said. “Once it’s done, it’s done. End of story.”

In Forest Park this past year, new members of the village council and the mayor have discussed opening up the town to gambling and dedicating revenue to police and fire pensions. As in many Cook County suburbs, Mayor Anthony T. Calderone also serves as the liquor commissioner and receives campaign contributions from local bar owners.

“If it’s this contentious and the village council has been hands-off, the voters should decide,” said Eberline.

The Forest Park Election Board reconvenes Aug. 31 to accept the signatures that have been cleared by the Clerk’s office and others that have been “rehabilitated” through notarized voter affidavits.

“The challenges and objections just show how far the pro-video gamers will go to keep it off the ballot,” said Eberline. “They know they will lose the vote and they know the council will vote it in for them, and so they want to keep it out of the hands of the voters.”