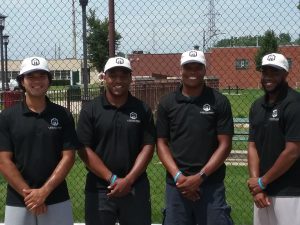 A group of young men from different backgrounds are putting their passion, creativity and enthusiasm into trying to positively impact the lives of local teens and young adults.

A Greater Good Foundation, based in Chicago, provides mentoring and educational services to grade school, high school and college students.

Doing everything from being drivers for ride services to doing personal fundraising, the organization’s founders and leaders are doing whatever they can to finance the Greater Good Foundation.

“We have used personal money. We have driven Uber and Lyft,” said Charles Carter, one of the organization’s founders. “We have reached out to friends and family. We are going to do whatever is necessary. If somebody makes $40, it goes back into the program.”

It was Memorial Day Weekend 2016 — when 69 people were shot in Chicago, 17 of them fatally — that was the catalyst for Carter and his fellow recent graduates to band together to do something.

They created the Greater Good Foundation, an organization that encourages youths to think outside the box. They provide the support and resources for youths to imagine and innovate beyond their circumstantial limitations.

“We don’t want kids to feel stuck in their neighborhood,” co-founder Anthony Garland said. “We want to take them out and experience different environments.”

Part of the group’s long-range plan is to establish its own boarding school so clients are taken out of the environments that have led to problems.

“We only have them for a couple of hours,” Garland said of Greater Good’s school and mentoring efforts. “It might be better for some of them to remove them from their neighborhoods. 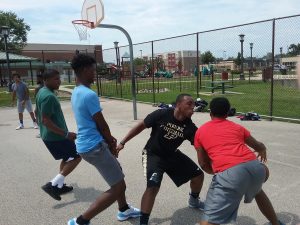 Being in their young 20s, the organization’s key leaders are the same age as an older brother or neighborhood friend of the client, Carter noted. He said being closer in age to kids helps in relating to them and makes it easier to get a positive message through to them, he said. They are already seeking out the next round of young 20-somethings to mentor kids.

“We want them to experience and see things, not just basketball,” Adams said on a recent day when the group’s leaders were playing basketball against mentored youths in Bellwood. “We talk about stress and how to deal with it, how to bear it. We want them to know that they can serve other people, that there is room for messages of hope.”

— Chicago-based foundation encourages youths to think outside the box —