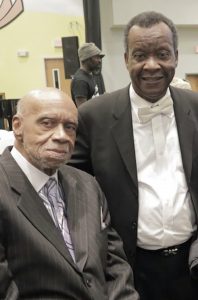 Willie Wilson is a man on a mission.

It is not a political office that drives the frequent candidate, although he will run as an independent this fall against U.S. Sen. Dick Durbin, D-Ill.

The 71-year-old businessman wants to see America make reparations to African Americans for their ancestors’ enslavement.

Wilson is hoping to get Illinois lawmakers to pass a bill creating an Illinois People of African Descent-Citizens Reparation Commission.

Wilson will be in Springfield on Wednesday (Feb. 19) when state Rep. Will Davis, D-Hazel Crest, who is assistant House majority leader, introduces a bill creating the commission.

The proposed commission would work to:

Wilson said he has no dollar amount in mind for reparations per family or a total dollar amount for the payments but said any reparations should focus on individuals in predominantly black neighborhoods of the state who are struggling.

“This would not be for me,” the wealthy businessman, who has self-funding his runs for Chicago mayor and U.S. president, said from his Chicago penthouse overlooking Lake Michigan. “I hope white, average Americans can look at and support what the legislation would do.”

Wilson, who grew up in Louisiana, was the son of a sharecropper, working in the fields for 13 years with no compensation.

“I know how it feels to be poor and taken advantage of in a world that says because you’re black, you’re not a man, that you’re ‘less than,’” Wilson wrote in an open letter to the citizens of Illinois that was recently published as a paid advertisement in the Chicago Sun-Times. “… I fiercely support reparations for the millions of descendants of African enslaved people that still suffer from the effects of the brutal centuries-old treatment which has wreaked havoc and destruction upon generation after generation. “The original sin of slavery has now morphed into new-age injustices of violence and other systemic prejudices.”

Wilson said his fire for getting reparations for struggling blacks in Illinois and around the country will not fade.

“I will be working on this until I die,” the businessman said. “… I am not going to stop.”

“We will take it one state at a time,” Wilson said.

He said civil rights leaders such as Martin Luther King Jr. paved the way for blacks like him to succeed and he wants to carry that torch for future generations.

“If not for Dr. King, I would not have had the avenues to be in the position I am in,” Wilson said. “Had 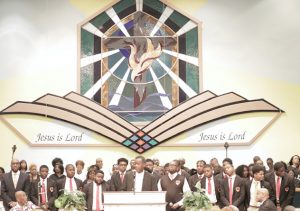 Chicago businessman Willie Wilson talks at a Feb. 8 reparations rally at Holy Temple Cathedral in south suburban Harvey. Wilson will be in Springfield on Wednesday (Feb. 19) when a bill proposing the creation of a reparations commission in Illinois is introduced (Photo by Cynthia Manuel photo)

it not been for those who went before them, each generation would not have gotten where they’ve gotten. I’ve got to do something for the next generation.”

Wilson said he will continue to buy television airtime for his commercial urging Illinois residents to contact their legislators about supporting the reparations bill. Wilson said billboards are another messaging option he will pursue to get the word out about the bill.

“We are moving into the neighborhoods with our message. We are going to work hand in hand with them,” Wilson said. “We are going to do whatever we need to do to make this work.”

The businessman said he is moving forward with his efforts for black seniors who continue to struggle.

“I am doing this for people my age, for people who don’t have health insurance,” Wilson said.

Along with helping seniors, Wilson said he wants to see reparations go toward creating education and skills centers in impoverished neighborhoods.

“We’ve lost two generations to the prison system, where in some low-income areas, we have locked up 90 percent of the men,” he said.

According to Wilson, the reparation campaign is personal for him.

“I am a person trying to make up for what the politicians haven’t done,” Wilson said.

The businessman balks at claims that he is championing the reparations cause to make a name for himself politically.

“What does politics have to do with something like this?” Wilson asked. “I am not going to be paid anything for this.”

In fact, Wilson said, he has spent hundreds of thousands of dollars on his reparation efforts.

He knows the long odd he faces in getting reparations approved not just in Illinois, but the entire country.

The reparations movement is gaining some traction, however.

Chicago aldermen are expected to discuss reparations next month and Evanston officials plan to tax marijuana sales in their community to provide reparations to black residents.

“There are a lot of people in the country behind the whole thing,” Wilson said.

Wilson said he envisions town hall meetings being held where officials and residents would talk about what reparations could and should look like on the state level.