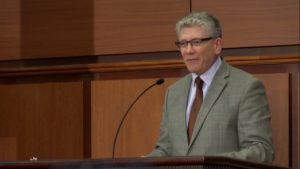 Cristian Ionescu, pastor of Elim Romanian Pentecostal Church in Chicago, leads an in-person service May 17. Despite being one of three pastors cited for disorderly conduct for having group services with more than 10 people, he has no intention of stopping services. (Facebook screenshot)

Raul Tomsa wishes he could worship with his family, but that has not stopped him and other members of Elim Romanian Pentecostal Church in Chicago from gathering Sundays.

“My wife stays home with our three kids. It’s weird. It’s awkward,” Tomsa said of the church’s social distancing guidelines, which restrict members of the same family from coming to service together.

He said for the city and state to say that churches may need to wait up to a year to open under reopening plans is crazy.

His pastor, Cristian Ionescu, is one of three clergy leaders in the city cited for disorderly conduct for allowing more than 10 individuals inside the building for May 17 worship services. Elim also held services May 10 — and has no plan to stop, Tomsa said.

“Congregants now see what we are up against and anger has spread,” Tomsa said.

Tomsa, whose family were founding members of Elim in the city’s Albany Park neighborhood, said Romanians are used to struggles and will continue to persevere in this battle with the city and state.

He remembers the stories his parents told him about communism — secret police and permanent records. 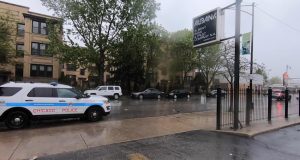 “My parents wanted to flee. They wanted to come to the land of the free,” Tomsa said. “It may be we’re overreacting, but this is not what America was founded on. It is not what people came to this country for. If you told people a year ago about this, no one would believe you would see it.”

On May 17, Tomsa went live on Facebook as Chicago police blocked the entrance to a bank parking lot the church rents for parking spaces. He said at one point there were more than 1,300 people following his video and commentary as police restricted parking in the area around the church.

He blasted Chicago Mayor Lori Lightfoot for accusing Trump’s action for churches to reopen immediately as “pandering to his base.”

“I’m accusing Mayor Lightfoot (and Gov. J.B. Pritzker) of punishing and harassing churches for perceiving them as the other side’s base,” Ionescu wrote in a Facebook post Friday. “This is pathetic! Mayor Lightfoot plans on reopening restaurants very soon, in a matter of days, with social distancing guidelines, but based on AVAILABILITY OF SPACE, “INSIDE, because it’s Chicago and it rains!” This is beyond discrimination! This is outright contempt! I’m more determined than ever!”

Tomsa said it made good sense to not gather and to livestream service for two months over initial coronavirus concerns, but that it was never meant to replace congregation services.

“A cornerstone of faith is being able to gather,” Tomsa said. “We don’t believe livestreaming is church. It’s extra credit. It’s not a pillar.”

He said the church has put strict guidelines in place, such as children under age 10, seniors over age 60, and frontline workers and their spouses not being able to attend services in person. 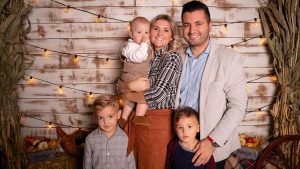 Raul Tomsa, whose family were founding members of Elim Romanian, and his family. Tomsa said Romanians are used to struggles with government. “This is not new to us. It is stuff we have seen before on the other side of the world,” he said, commenting on the church leaders fighting city and state stay-at-home orders. (Provided photo)

He said Elim Romanian has not even gotten to the maximum number of seats it can fill under Centers for Disease Control social distancing guidelines, which is 110.

“Not everyone is ready to do it,” Tomsa said of some congregants being hesitant to return to group services. “Some are not going to do it. We are not conspiracy theorists. The pastor wears a mask. We are not those guys.

“Once we get to 110 people, we are looking at multiple services, but we have not even gotten to that point yet.”

Chicago businessman and philanthropist Wille Wilson, who spoke at Philadelphia Romanian Pentecostal Church in Chicago on May 10 and was scheduled to speak at Metro International Praise Church in Chicago on Sunday, applauded Trump’s declaration of churches as “essential.”

Wilson has offered to pay the legal expenses of any churches and church leaders brought up on charges for having services.

“I thank God for placing this important issue on the heart of President Trump. His swift action to recognize the Church as essential is courageous and will be well received by faith leaders, and church members across the nation,” Wilson said. “Mayor Lightfoot and Governor Pritzker’s intimidation toward the Church is wrong and every God-fearing believer should be outraged.

“The first right guaranteed by the Constitution is free exercise of religion. The governor and mayor continue to trample on our constitutional rights while hiding behind a stay-at-home order that treats the church as nonessential. Governor Pritzker’s order discriminates against the Church, and prioritizes liquor stores, marijuana dispensaries and other major retailers over the Church — that is wrong.

“The right of the Church to hold worship service and minister to the needs of those who are suffering from financial, social and emotional strain shall not be abridged. I pray that God will bless President Trump, our churches, and the state of Illinois. I am confident that the Trump administration will issue ‘best practices’ to help keep people safe from COVID-19.”