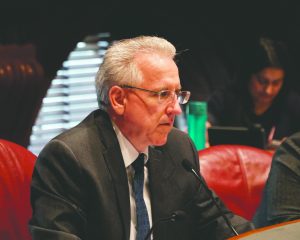 Sen. John Mulroe (D-Chicago) speaks during a Senate Judiciary Committee hearing earlier this year. Mulroe was sworn in as a Cook County Circuit Court judge June 21. His Senate term will be filled by someone appointed by the district’s Democratic committeemen until the 2020 election. (Photo by Lee Milner/Illinois Times)

SPRINGFIELD — John Mulroe traded his state Senate seat for a judicial bench. After serving more than eight years in the General Assembly, the Chicago Democrat was sworn in June 21 as a Cook County Circuit Court judge.

He was appointed by the Illinois Supreme Court and nominated by Justice Mary Jane Theis, who said she was “very impressed” with Mulroe’s passion for children’s judicial issues, including delinquency cases and minors in vulnerable family situations.

“He’s very passionate about that, and I think he’s going to be a really important voice in the judiciary,” Theis said. “My sense of him as a person is that he’s going to make a wonderful judge.”

The justice nominated Mulroe after what she called a “vigorous process” — an application with essay questions, a screening by each of Cook County’s dozen bar groups, vetting by a committee formed by Theis and an interview with the justice.

Mulroe leaves the Senate with a legacy he said he is proud of, one built on legislation that had a tangible impact on the lives of Illinoisans.

“What gave me the most satisfaction of being down in Springfield was helping people,” he said.

Mulroe estimated he sponsored just under 200 measures that were signed into law by three different governors.

There was one mandating that insurance companies cover 3D imaging that can better detect breast cancer. Mulroe called it an “important” bill, done with his wife, two daughters, 12 sisters-in-law and countless nieces in mind.

Another of his initiatives requires high schools to teach students how to use an automated external defibrillator and perform CPR in health classes. It was inspired by a man who shared the story of his daughter’s death — there was an AED device on the wall of her dance class but no one knew how to use it.

“That tugged at me,” Mulroe said. “It was a tough bill because it required schools to teach certain classes, but I know that bill saved lives.”

He later expanded the scope of the measure to apply to police stations. Mulroe recalled two instances in Chicago when police officers suffered heart attacks at the station and were revived by colleagues who used the AED.

Sen. Michael Hastings, a Tinley Park Democrat, called Mulroe more than a colleague whose office was nearby for years — he was a mentor he could turn to for advice, a model for how to be a good father and a “personal friend.”

He was also one of the best pitchers on the softball team during the annual spring game between lawmakers and someone who could hold a conversation on anything from Northwestern University football to probating a will.

“John knows the law, he’s practiced the law and now he gets to administer the law,” Hastings said.

Senate President John Cullerton, a Chicago Democrat, added that Mulroe’s prior legal experience and chairmanship of the Senate Judiciary Committee “have prepared him well for this next step.”

“John Mulroe is quite simply, and quite remarkably, a good person,” Cullerton said. “And while I will miss his steadying effect on the Senate, I wish him the very best in this next chapter of his ongoing public service.”

Mulroe has had his own law firm since 1995. Prior to that, he was an assistant state’s attorney in Cook County for six years.

Mulroe replaces Thomas Allen, who retired from the bench. His term lasts until Dec. 7, 2020, when an election will be held to fill the position permanently.

Democratic Party leaders from Mulroe’s district will choose who fills his Senate seat until the next election in 2020.

This interview has been edited for length and clarity.

Capitol News Illinois: How did you become a state senator?

Sen. John Mulroe: I was born into a family of four brothers — two older, two younger — all within five years of each other. We grew up in a two-bedroom home, and my brothers and I shared a room with each other, double-bunked. Dad was a sixth grade-educated Irish guy. Mom had her high school education. I can tell you with no uncertain terms that I never, ever expected to be a state senator.

Whether it’s actually in the public sector or in private practice, participating on the school board, coaching, being a member of the Chamber of Commerce — I’ve always been involved in public service, in the neighborhood, in the community, and I guess, just looking back, that’s part of me. I would never have told you that would have been my strength or what I was going to do when I was … 16 or 18.

In 2008, I ran for 10th Subcircuit judge and I lost by 1,300 votes. Someone asked what I was going to do if I lost, and I said I’m going to turn the next page and start the next chapter of my life. I didn’t know at that time, in answering that question, that it was going to include being a state senator. It was something that I never expected, but I would never trade for anything. It’s a fascinating, eye-opening experience.

CNI: Given how much you seem to look fondly on your time as a senator, why did you pursue the opportunity to fill this judicial vacancy?

Mulroe: I told everybody else, including Justice Theis, it’s with mixed emotions that I do this because I enjoy the people in Springfield. I enjoyed the process — the give and take, the compromise and negotiating, the bills, the people — but I also recognize that I wasn’t going to be there forever. And after eight and a half years, I’m more senior than 41 of the 59 sitting state senators. You’re away from your family; I knew the sacrifice and I was willing to do it, because I enjoy public service.

Things have happened for me, and I just keep going. I was planning on running for Senate again, but this opportunity came up and I thought, I’m going to try to seize this opportunity. I went through the process. I don’t know if it’s a grueling process, but it’s time consuming, and rightfully so. They’re trying to vet whoever’s trying to become a candidate for judge, which I think is a really important role that our judiciary plays in our society.

CNI: What aspect of advancing to this next chapter of your career and donning those judicial robes are you looking forward to?

Mulroe: I’m really excited about serving the public in a different form, on the bench. It’s something that I think is going to impact people’s daily lives. They’re going to come before a judge, and maybe for some it may be the first time that they actually have contact with the judiciary. I’m going to do my best to let them know that there are decent people on the bench.

CNI: How do you think your experiences will help you as a judge?

Mulroe: In 2008 when I ran for judge and lost, my evaluations were good. I had a wide variety of experience. Fast forward now 10 years, I told everybody in those evaluation rooms, “You all thought that I was going to make a good judge back then. I can tell you that my experience in the state Senate, in the Legislature, will make me a better judge.”

The most beneficial part to being in the state Legislature … is to be exposed to our entire state. And I guess what I mean by that is, I met tremendous people from all corners of our state, and I’ve learned things that I would not have learned but for me being in the Senate — whether it’s people or issues. And … the other benefit is just, I understand the law-making process.

CNI: Is there anything you feel you left unfinished in the Senate?

Mulroe: I have a CPA, too, from undergrad, and the finances when I first got down to Springfield were concerning to me. When I got down there in 2010 in veto time, things were bad. It got stabilized, then it got real rocky again. Hopefully, we’re back on solid footing in terms of getting our financial house in order. That’d be the only thing I probably wish would have been in better shape by the time I left. But we’re heading in the right direction, I think.

CNI: What has your family’s reaction been to your departure from the chamber?

Mulroe: I’ll tell you, my children for Father’s Day, they brought me to tears. They knew I was leaving the Senate and they put together this little booklet with pictures of all the things that have occurred since my time in the Senate — from our first family photograph that was taken to the end, and then they wrote a narrative of what I meant to them and the steps I’ve taken throughout my life and how proud they are of me. I’m just very proud of that. My children, my wife and my family, that’s my life, and I try to keep doing the best I can in whatever I do.