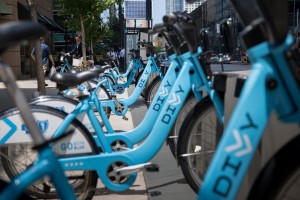 Under the new initiative announced by Mayor Rahm Emanuel’s office July 9, Divvy for Everyone (D4E), those residents with incomes below 300 percent of the federal poverty level who don’t have a credit or debit card will qualify for a $5 annual Divvy membership. The regular annual membership cost is $75. Photo by Tony Webster

The city of Chicago and Divvy are working to help expand the city’s bike-share program by offering reduced-cost annual memberships to residents.

Under the new initiative announced by Mayor Rahm Emanuel’s office July 9,  Divvy for Everyone (D4E), those residents with incomes below 300 percent of the federal poverty level who don’t have a credit or debit card will qualify for a $5 annual Divvy membership. The regular annual membership cost is $75.

In order to be accepted on the reduced rate, applicants must appear in person at any of five Local Initiatives Support Corporation (LISC) Financial Opportunity Centers – located in Bronzeville, Englewood, East Garfield Park, Humboldt Park and Ravenswood – and provide proof of income and Chicago residency. Those who qualify will be charged $5 and will be issued a Divvy member key on-site, according to the city.

The city is exploring a number of options for people to be able to continue their memberships at full price after the initial year. These include payment plans, cash payment options, and a pathway to credit-building and financial empowerment programs with LISC Financial Opportunity Centers, according to the city.

“As a longtime advocate for bike usage in the Third Ward — more specifically in Bronzeville — I am proud to support the Divvy for Everyone program,” said 3rd Ward Alderman Pat Dowell. “This partnership between CDOT, Divvy, and community agencies allows the usage of Divvy Bikes to be more affordable for residents across the City of Chicago.”

“Convenient and affordable transportation is a lynchpin to quality of life,” Rebekah Scheinfeld, commissioner of the Chicago Department of Transportation (CDOT), which manages Divvy, stated in a news release. “Divvy is a transportation resource that can help working families save money and can often make the difference in terms of providing crucial access to jobs. We’re very excited to be able to expand access to Divvy through the D4E Program,” she said.

“Divvy is about more than just biking. Nearly 80 percent of our members are using it to connect to transit, and 75 percent say it’s a way to save time on their commutes,” said Elliot Greenberger, General Manager of Divvy. “We’re excited to make Divvy more accessible to more working class families who often face a disproportionate burden of time or cost in their commutes. Divvy, and its operator, Motivate, are deeply committed to ensuring that bike share benefits residents of all income levels and backgrounds.”

The D4E program is made possible through a $75,000 grant from the Better Bike Share Partnership and matching funds from Divvy’s exclusive system sponsor, Blue Cross Blue Shield of Illinois. In addition, the first 250 D4E members will receive a free bike helmet, thanks to BCBSIL’s sponsorship.