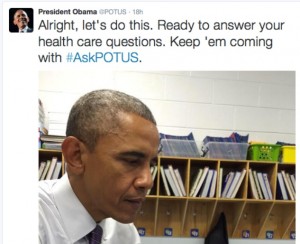 Enroll Chicago 2016 is now open through Jan. 31. Chicago residents can visit the State of Illinois’ website, www.getcoveredillinois.gov, for more information on opportunities under the Affordable Care Act.

Chicago will participate in the White House’s Healthy Communities Challenge — a national initiative designed to assist uninsured citizens across the country in accessing healthcare coverage afforded by the Affordable Care Act.

The City announced its participation in the Challenge during its annual open healthcare enrollment period for residents.

“The strength and future of Chicago is dependent upon the health and well-being of its residents,” Mayor Rahm Emanuel said. “We want to get as many people enrolled in healthcare as possible because there is no reason why hardworking families should not have the medical coverage necessary to keep everyone in the household healthy and informed.”

There are still many individuals who are eligible for Marketplace coverage. In Chicago, approximately 125,000 residents who qualify still lack insurance.

“The Affordable Care Act is helping millions of Americans get the health insurance they need, but our work isn’t done,” said Valerie Jarrett, senior adviser to the President. “That’s why I’m here in Chicago today, to urge all Americans to go online or call for assistance to find the best healthcare coverage for themselves and their families. We are thrilled that Chicago is one of 20 communities participating in the President’s Healthy Community Challenge to reduce their population of uninsured during the current open enrollment period — and best of luck to my hometown!”

Thanks to the ACA, healthcare coverage is affordable. The average monthly premium in Chicago for the second-lowest cost silver plans will decrease by 10 percent from 2015 to 2016 before tax credits. And since shopping for the best plan is a healthy approach, there are eight issuers in Chicago who are offering individual health plans in the Marketplace in 2016.

The City of Chicago has undertaken efforts of its own to ensure all of its residents have access to affordable healthcare. In 2013, Emanuel and the Chicago Departments of Public Health launched the Enroll Chicago! initiative to engage and educate residents on accessible healthcare with the support of more than 40 community partners and multiple city agencies. Since the inception of Enroll!, more than 108 librarians have been trained on ACA and 100 events have been hosted — helping lead to residents enrolling in health insurance — many for the first time.

Enroll Chicago 2016 is now open through Jan. 31. Chicago residents can visit the State of Illinois’ website, www.getcoveredillinois.gov, for more information on opportunities under the ACA.