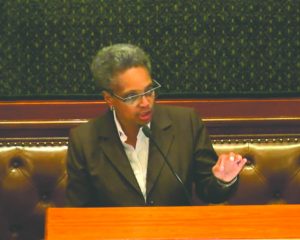 Chicago Mayor-elect Lori Lightfoot addresses the Illinois House on Wednesday in Springfield. “For too long, the residents of Chicago and Illinois have seen reasons to move away,” Lightfoot said. “Only by working together will we be able to create an environment that attracts people to our cities and our state in ever greater numbers.” (BlueRoomStream.com)

SPRINGFIELD — Chicago Mayor-elect Lori Lightfoot issued a call for statewide unity Wednesday in a speech on the floor of the Illinois House of Representatives.

“We are all Illinoisans, and we all have the best interests of our constituents at heart,” Lightfood said.

But she was speaking Wednesday before a chamber where the city of Chicago often generates resentment among some “downstate” lawmakers because of the political power it holds, the amount of influence it exerts and the amount of state resources that go to Chicago.

One example of that is a resolution introduced this year by a group of downstate Republicans that would urge Congress to declare Chicago a separate state.

While that resolution is unlikely to receive serious consideration, Lightfoot tried to address the sentiment behind it by emphasizing that Chicago is still part of Illinois.

“I-80 is just a stretch of pavement. It is not a border,” she said, referring to the Interstate highway that, for many, marks the dividing line between northern and downstate Illinois. “We are all one state. And Illinoisans, wherever we live, all want the same thing for themselves and their families. The list is a long one: safe communities; access to good schools; stable and well-paying jobs; affordable homes; quality health care; and a government that is ethical and acts as a responsible steward of our tax dollars.”

At the same time, though, Lightfoot also told lawmakers that the people of Chicago and the people of the rest of Illinois have common interests.

“Let’s be clear. When Illinois thrives, Chicago thrives,” she said. “And the reverse is also true. For too long, the residents of Chicago and Illinois have seen reasons to move away. Only by working together will we be able to create an environment that attracts people to our cities and our state in ever greater numbers. Not only do Chicago and the state of Illinois rise or fall together, but we will grow together. It is imperative that we grow.”

Lightfoot is scheduled to speak to the Illinois Senate on Thursday. She will be sworn into office May 20.