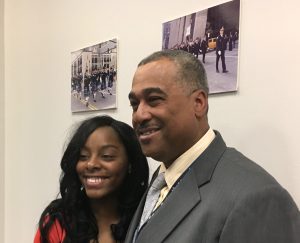 Retired Det. Keith Carter and Anjel, the child left by her birth mother at his Chicago Police station 14 years ago. (Photo by Irv Leavitt)

“You were abandoned by your parents.”

Few more significant emotional injuries might be sustained by a child, or wrought by a mother and father.

Most of us can’t even fathom walking away from our own kids. For those who don’t get it, a peek in the New Testament reminds us how society has felt about such things since Paul the Apostle was said to be handing out free advice: “But if any provide not for his own, and especially for those of his own house, he hath denied the faith, and is worse than an infidel.”

Such biblical commands are familiar to retired Chicago Police Detective Keith Carter, who says he sees life through the prism of his Christian faith. But the 30-year police veteran has had an experience that demonstrates a different way of thinking about the whole concept of quitting on one’s children.

It can have its good points, he’s found out. It depends on how it’s done.

Fourteen years ago, Carter was a youth officer working in the 11th District station when he was called to the desk to see about a baby girl.

She wasn’t supposed to be there. Since 2001, Illinois’ Safe Haven law allowed parents to anonymously relinquish babies at fire departments and hospitals. But this time, a mother had done it at a police station, where personnel weren’t trained, and a parent’s anonymity was not legally protected. But the mother had come and gone.

The arrival of little “Anjel” at the West Side station would, within months, lead to the General Assembly adding police stations to the roster of acceptable places to drop off unwanted babies.

But Carter hadn’t needed any law to tell him what to do. He took the baby girl into protective custody, and called in the Department of Children and Family Services.

Anjel was adopted shortly after birth. She’s grown into a teenager who does well in school, and has significant talents. She made her high school’s varsity dance team as a freshman. She says her adoptive mother April treats her and her siblings with love.

Carter didn’t meet Anjel for the second time until a recent event promoting Safe Haven Awareness Month at Chicago Police Headquarters. Anjel was one of four children rounded up by the Save Abandoned Babies Foundation to help publicize the law, so desperate parents — mostly mothers — might be more likely to know there’s an alternative to some of the more awful ways of handling an unwanted birth.

The year before Anjel was born, an ad to spread the word featured an overflowing Dumpster, labeled, “It smells. It’s dirty. And unfortunately, it’s where some women leave their babies.”

Over the years, 126 babies have been saved by the act, according to the foundation’s Dawn Geras. She helped shepherd the law, and has championed it ever since.

In the last five full years, 34 children have been relinquished legally in Illinois. Nine were found illegally abandoned, but alive. Another nine were found dead.

“We have no idea how many weren’t found,” Geras said.

A police officer sees many people, good and not so good, in a career. Carter, for instance, handled many cases of child abuse and neglect. These are often the result of children being born to people too broken themselves to be trusted with the care of little human beings.

He was asked how the Anjel experience ranked with the positive landmarks of his career. “You know, now that I’ve seen how well she turned out, this is the number one thing,” he said.

Anjel took his card. She wanted him to tell her everything he knew about her beginnings on Earth.

“I have nothing to tell her,” he said, looking at the floor. “I wish I did. I was upstairs when she was dropped off. I never saw her mother.”

But her mother did not completely disappear. There are records of her stopping by the desk of the police station a few hours after she left, to ask, anonymously, if her baby was all right. And she also checked at Anjel’s next stop, Mount Sinai Hospital, to ensure the welfare of her baby, one last time.

There is more than one way to protect and provide for a child.