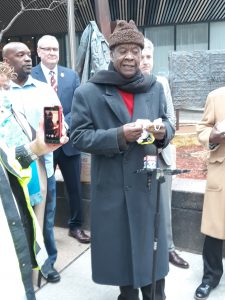 Dr. Willie Wilson talks about the 11,000 masks he is donating to Chicago first responders during a March 20 press conference in front of Fire Station 13 in downtown Chicago. Wilson is also donating $1 million — and allocating it on the honor system — for people unemployed because of COVID-19. (Kevin Beese/Chronicle Media)

Chicago philanthropist Willie Wilson has pledged $1 million to help individuals who have lost their jobs due to the coronavirus pandemic.

The doctor and frequent political candidate said he wanted to put his money where it matters most in a time of enormous need.

“This is a rough time in our country right now. Folks are anxious … folks are afraid, and their future is uncertain,” Wilson said. “We’re all in this together. So, we must all pull together. It’s just a small way I can help bridge the gap until the government steps up and does what’s right, quickly, for those in need. I am blessed to be able to do it. It’s just who I am.”

Wilson said he will disseminate the money using the honor system — believing that individuals will be honest about their unemployment status when signing up for the financial assistance.

The philanthropist said millions of people need a real helping hand. He said he is offering the money with no strings attached.

Wilson made the announcement Friday morning and by Saturday evening a note on the website said, “We have exhausted our funding for this $1 million giveaway.”

The message did say that people could register to be considered for “our next event.”

Individuals who are recently unemployed, homeless or senior citizens are invited to apply for a future giveaway through Wilson’s website at drwilliewilsonfoundation.org.

Standing outside Fire Station 13 — one of the busiest fire stations in downtown Chicago — near Columbus and Wacker drives, on March 20, Wilson was flanked by fire and police personnel and was humbled by his ability to assist in a time of need.

“I am responding to the need of my fellow man. It’s just the right thing to do,” Wilson said. “The country has been waiting for clear direction that we haven’t received. As I have stated, in the absence of leadership, leaders lead.

“We’re resilient. We can pull together, step up and find a way. We will help neighbors and communities pull together We’re in this together. Together is the way. We depend on these first responders heavily. We need them safe. They need to be protected. I saw the need. I have the means to fill the need, so I am choosing to lead the way. It’s too critical of a time to sit on the sideline.”

“First responders are the first line of defense against this invisible enemy we’re fighting. It is critical we maintain a healthy workforce,” Tebbens said. “We are operating with extremely limited resources and lack of proper equipment.

“We also have lacked leadership from the top. We need decisive, proactive leadership during an uncertain time like this and Dr. Wilson is providing that kind of decisive, thoughtful leadership. We simply cannot thank him enough.”