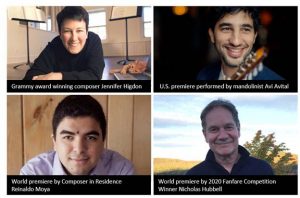 Pictured are artists who will be featured at the Chicago Philharmonic Society’s upcoming concert “FanFare Chicago” on March 27.

The Chicago Philharmonic Society proudly presents its third of four concerts of its 32nd Season, “Fanfare Chicago” on March 27 at Harris Theater for Music and Dance, 205 E. Randolph, Chicago.

Single tickets ranging from $10-$75 are now available at harristheaterchicago.org, and include a red-carpet, pre-concert experience outside the Harris Theater sponsored by Continental AutoSports Ferrari, one of the oldest and most trusted Ferrari dealerships in North America.

“Fanfare Chicago” spotlights Jennifer Higdon, one of today’s most performed living composers. Higdon’s many achievements include winning a Pulitzer Prize (for her violin concerto, written for Hilary Hahn in 2009), and three Grammy Awards (for concertos for percussion, viola, and harp).

“For me, composing a concerto is like constant discovery,” Higdon has said regarding her violin concerto. “You’re trying to find out what other concertos do, and you look at the person you are writing for, and you can kind of tailor-make it.”

Also during the concert, Chicago Philharmonic’s Donna Milanovich Composer in Residence Reinaldo Moya will present the world premiere of his piece “Polo Romanesco” inspired by the Baroque era in Latin America as it incorporates the Baroque Romanesca chord progression and its Venezuelan descendent, the popular song “Polo Margariteño.”

Nicholas Hubbell, winner of the 2019-2020 Chicago Philharmonic Fanfare Competition, will premiere his piece “Chicago Fanfare”, which celebrates the beauty and vibrancy of Chicago and gives each instrument section a representation. A large panoramic photo of Chicago’s cityscape at night, taken offshore from lake Michigan, served as visual inspiration as Hubbell wrote the piece.

For the safety of patrons and musicians, all audience members, musicians, and staff are required to show proof of vaccination to enter the Harris Theater. Masks will be worn by all throughout the performance.