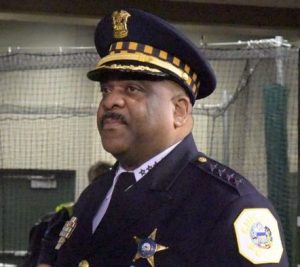 Chicago Police Chief Eddie Johnson has been fired with less than a month to go in his tenure.

“I have terminated Eddie Johnson’s employment with the city of Chicago, effective immediately,” Mayor Lori Lightfoot said Monday morning. “Upon a thorough review of the materials of the (city’s) inspector general’s ongoing investigation, it has become clear that Mr. Johnson engaged in a series of ethical lapses that are intolerable.

“Mr. Johnson was intentionally dishonest with me and communicated a narrative replete with false statements regarding material aspects of the incident that happened in the early morning hours of Oct. 17. Had I known all the facts at the time, I would have relieved him of his duties as superintendent then and there.”

The Oct. 17 incident was a case in which Johnson was found slumped over the wheel of his car. He said he had pulled over because he felt ill. He later admitted that he had a “few drinks” that evening.

“Perhaps worst of all, Mr. Johnson has misled the people of Chicago,” Lightfoot said. “The 13,400 sworn and civilian members of the Chicago Police Department who work hard every day deserve a leader who they can believe in.

“In public life, we must be accountable for our actions and strive to do better every day. And to achieve the reform and accountability in the department that we know is urgently needed, we require a leader whose actions reflect the integrity and legitimacy of what it means to be a Chicago police officer. I am confident that incoming Interim Superintendent (Charlie) Beck is such a leader, and that both he and the eventual permanent superintendent will serve with honor.”

Johnson had announced Nov. 7 that he would be retiring at the end of the year.

A native Chicagoan and 31-year veteran of the Chicago Police Department, Superintendent Johnson has commanded the nation’s second-largest police force since 2016, leading CPD to reductions in gun violence, strengthening community partnerships across the city and implementing systemic reforms around police accountability and transparency.

“Superintendent Johnson has dedicated more than three decades of his life to serving and protecting the people of Chicago, and he will end his service standing on a record of reform and progress that will be felt long after his retirement,” Mayor Lightfoot said at the time of Johnson’s retirement announcement.  “Chicago is better because Superintendent Johnson called this city his home and dedicated his career to serving it.”

Since his appointment, Johnson implemented a data-driven crime strategy that reduced overall crime in Chicago and achieved a 38 percent reduction in total shootings. Using camera technology, predictive analytics and gunshot detection through the Chicago Police Department’s Strategic Decision Support Centers and its partnership with the University of Chicago Crime Lab, the technology-driven approach to crime-fighting has also resulted in 20-year-lows in robberies and burglaries citywide.

“Chicago is my home, and it has been an honor to serve as superintendent,” Johnson said at his retirement announcement. “I want to thank every officer for buying into the changes we have brought to CPD. Chicago is a safer place than when I was appointed superintendent in April 2016. People in every neighborhood and on every block trusted me with their safety. I will never forget this job or those who have helped me succeed.”

During the past three years, Johnson led the department’s hiring campaign, which has added nearly 1,000 police officers to patrol Chicago’s neighborhoods and nearly 300 detectives. Additionally, Johnson launched crime-solving nerve centers, called area technology centers, in each of the city’s detective areas, which have helped improve the department’s clearance rate by nearly 20 percent.

As one of his first initiatives as superintendent, Johnson launched a Community Policing Advisory Panel, made up of community residents, national experts and police officers to develop a set of recommendations for a reinvigorated and re-imagined community policing strategy unique to Chicago. The department has championed the strategy, creating an Office of Community Policing.

Johnson pushed for reforms such as ensuring every patrol officer has body-worn cameras, and expanding use-of-force training and mental health supports for all officers.

Johnson joined the Chicago Police Department in 1988, serving the majority of his career within the Detective Division and Gang/Tactical units, and Patrol Bureau where he rose to the rank of chief. Johnson was born and raised in Chicago, growing up and residing in Cabrini Green until he was 9 years old, at which point his family moved to the city’s South Side where he continues to reside. He holds a bachelor’s degree from Governors State University.

Interim Superintendent Charlie Beck joined the Los Angeles Police Department in 1977, where he rose through the ranks of police officer, sergeant, lieutenant and commander during 41 years, including becoming chief of detectives, where he implemented changes to the Detective Bureau. As chief of police from 2009-18, Beck oversaw the implementation of reforms and community-policing initiatives that not only brought the Los Angeles Police Department into compliance with its Consent Decree after 12 years, but also resulted in historically low crime rates across Los Angeles.