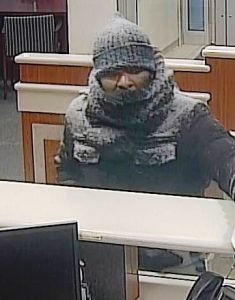 FBI Special Agent Alexis Figueroa said she compared the robber in the bank surveillance video with photos of robbery suspect Michael Tyner and confirmed that they are the same person.

Chicago police apprehended a bank robbery suspect after he allegedly fled a CTA station, ran across the Eisenhower Expressway, attempted to enter two vehicles and tried to hide in the bed of a pickup truck.

FBI Special Agent Alexis Figueroa said that a tracking device put in the cash Michael Tyner took from a Fifth Third Bank in Chicago on Monday (Feb. 5) led police to him. According to Federal Bureau of Investigation agents, Tyner, 30, of Chicago, robbed the Fifth Third at 100 S. Halsted St. of $3,240.

One of the two bank tellers that Tyner robbed placed money and a tracking device on the counter in front of him, agents said. One of the tellers said that Tyner looked at the money and said, “Give me more hundreds and $50s.” One teller responded, “That’s all there is,” at which time Tyner took the money, and tracking device, off the teller counter and placed it into a jacket pocket and left the bank, FBI agents said.

Chicago police sent officers to the bank as well as broadcast the movement of the tracking device over police airwaves. According to the Chicago Police Department, the tracking device hidden in the proceeds of the bank robbery indicated that it was at a CTA Blue Line stop between Morgan and Peoria streets about a half-mile south of the Fifth Third Bank.

According to police, Tyner was found at the station wearing dark clothing, a scarf over his face and generally matching the description of the bank robber. When officers approached Tyner, police said, he jumped off the Chicago Transit Authority platform, crossed the tracks, jumped over the expressway wall and began running south in the eastbound lanes of Interstate 290. Police said while they were in pursuit, Tyner discarded his hat and gloves.

Chicago police said Tyner then unsuccessfully attempted to enter two vehicles that were stopped on the highway by pulling on the car door handles. Officers said that Tyner then threw himself into the cargo bed of a pickup truck that was also stopped in traffic.

The arresting officers said they recovered a large bundle of currency and the tracking device from a front pocket of Tyner’s jacket. Officers also recovered dark gloves and a skull cap which had been used by the bank robber and discarded by Tyner during the pursuit.

When Tyner was brought to the bank and standing outside, one of the tellers said with 80 percent certainty that Tyner was the robber, agents said, while the other teller said, “That’s him, 100 percent.”

Figueroa said she compared the robber in the bank surveillance video with photos of Tyner and confirmed that they are the same person.

The tellers said that the robber entered the main entrance of the bank at 5 p.m. Feb. 5 and handed one of the tellers a note that read “GIVE ME All Cash! No die Packs! And do not alert!”

The robber than stated, “Give me large bills. Don’t give me any dye packs. Don’t press any buttons.”

Both tellers opened their cash drawers and removed money. One teller said after both tellers pushed money toward the robber, he stated, “Hundreds! Hundreds! I need hundreds.”