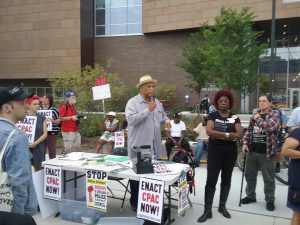 While Chicago Mayor Rahm Emanuel was inside Malcolm X College announcing his plan to put 1,000 more police officers on the streets, activist Ja’mal Green stood outside appalled that the mayor would reference the killing of his friend, Matt Williams, in his agenda.

“He disrespected us by using my brother Matt, who was killed earlier this year, in his speech,” Green said during the previous week’s announcement. “The mayor brought up Matt, an activist who hated him. He said, ‘He was killed, too.’ He used him to push his agenda to hire more police officers.”

Emanuel referenced Williams as “an anti-violence activist gunned down while playing video games at his friend’s house” Williams’ murder was one of seven Emanuel mentioned in his call to put more police on the streets.

Green said it would be better for the city if Hillary Clinton put Emanuel in her Cabinet, if elected president, or the mayor resigned.

“They are knocking down everything with no plans to redevelop. (There are) boarded-up schools all through our neighborhoods. (People are) walking around with trauma, watching their brother and sisters die in front of them and there is no counselor. There are no mental health clinics because they are all shut down.”

In his call for 1,000 police officers to be added during the next two years, the mayor said the officers will be assigned directly to the streets “to walk with residents in a partnership against violence.”

Emanuel said that more police alone won’t solve the problem, calling on all Chicago residents to be part of the solution.

“Every one of us has a role to play in rebuilding the vital partnership between our police and the community,” Emanuel said. “We all have to hold ourselves, and each other, to a higher standard. So I am calling on all Chicagoans to join a comprehensive plan to confront gun violence.

“No matter who you are, what your background is, where you live in Chicago, this fight belongs to all of us. Now there are three paths we must take to confront this challenge. There is enforcement, there is investment and there is prevention; and each is dependent on the others.”

The protest outside Malcolm X College on the evening of Sept. 22 was expected to be a prelude to a bigger protest slated for Sept. 29 at City Hall. 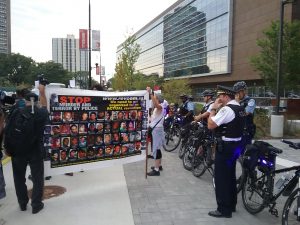 She said an uprising from the public is the one way things will change with Emanuel in charge.

She said without police accountability there will be no respect from the public.”

Muhammad Sankari said it was ironic that Emanuel chose a campus named after a slain black civil rights leader for his announcement.

“We have someone who’s responsible, who has the blood of young black people on his hands feeding and feeding us (bull) and we’re expected to listen to it,” Sankari said. “He’s desecrating the name of the martyr Malcolm X. He is desecrating everything (Malcolm X) stood for his entire life.”

Sankari said the difference in the Sept. 22 events was that outside the college were people of the communities that Emanuel was talking about while inside there was a  crowd packed with “phonies” who would “not even leave and drive through those communities at less than 40 mph in their cars.”

Frank Chapman, field organizer and educational director for the Chicago Alliance Against Racist and Political Repression, said that an independent citizen police panel is needed to start bringing police misconduct under control.

The Rev. Richard Tolliver, rector of St. Edmund’s Episcopal/Anglican Church, heard Emanuel’s message from inside the college. He said he was encouraged by the mayor’s talk and feels that Emanuel’s plan is a solid one.

“He talked about mentoring. He talked about public safety,” Tolliver said. “Clearly, unfortunately, there are people who have chosen a lifestyle that is a threat to society.”

He said just providing jobs, as some protestors called for, is not the answer.

“It has to be a comprehensive effort,” Tolliver said.