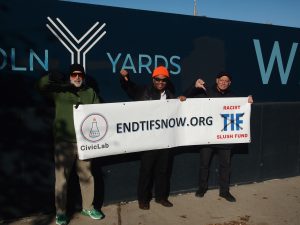 Members of the Civic Lab (from left) Howard Ehrman, Jonathan Peck and Tom Tresser hold a banner seeking to abolish tax increment financing district in front of the Lincoln Yards development on Chicago’s North Side, which has become the poster child for the argument against TIFs in the city. (Photo by Kevin Beese/Chronicle Media)

He has been turned down for funding 30 times at the local and national levels, yet his work to stop a controversial development tool continues.

Tresser is taking on Chicago City Hall as he tries to put an end to tax increment financing districts in the city. If successful on the city level, he would expand his efforts to the state and national level. The city has $1.5 billion in its TIF coffers, money Tresser and others contend should be used for schools and developments on the city’s South and West sides.

“I’m looking to upset the apple cart,” the Chicago resident said of his efforts to stop TIFs from being a development tool for city projects.

Tax increment financing districts freeze the amount of money taxing bodies get from a designated area for up to 23 years. The difference between the frozen assessment level for governing bodies and the new assessment level are put into a city fund to pay for infrastructure improvements in the area or rebated back to businesses as part of their deal for moving to the area.

The development tool was initially seen as a way to jumpstart development in blighted areas, but subjective interpretations and other loopholes have enabled TIFs to be created in nearly any area.

“The top 10 TIFs in the city are in the Loop. They don’t need TIF dollars to generate construction in the Loop,” Tresser said. “A lot of those Loop areas have not been blighted in 100 years.”

An example of his argument is the Lincoln Yards project, a massive mixed-use development on the city’s North Side. Located between the Lincoln Park and Bucktown communities, the TIF project, if built as planned, would include apartments, condominiums, and retail and entertainment space.

Tresser, who leads the Civic Lab, which works to educate people on tax increment financing districts, said it does feel, at times, that he is jabbing at windmills, taking on a political behemoth like TIFs, but added that even small victories make it worth the fight.

“I’m often depressed and overwhelmed — especially by the lack of coverage by local media and funding from foundations that say they support innovation, civic engagement, government accountability and democratic practices,” he said. “But I’m also unrealistically optimistic and have had enough success with such limited resources that I am hopeful that even modestly funded civic work can result in victories for justice and equality.”

For a guy who worked to keep the 2016 Olympics out of Chicago, the TIF fight is not too big of a stage for him to handle. 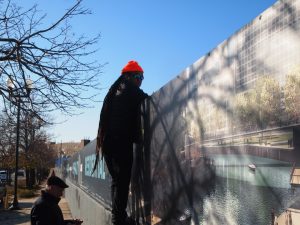 Peck, CEO of the Civic Lab, seeking to end TIFs in the city, peeks over a fence at the Lincoln Yards development. (Photo by Kevin Beese/Chronicle Media)

Seeing the numbers did not work in the city’s favor for the Olympics, Tresser led an email campaign of International Olympic Committee members for 70 straight days leading up to the IOC vote on the 2016 location.

“I could not live with myself if I didn’t speak up,” Tresser said of his anti-Chicago Olympics efforts.

Because TIFs are being used to benefit primarily white areas of the city at the expense of communities of color, Tresser has labeled the development tool “racist.”

Semi-retired and an adjunct professor at National Louis University, Treser said TIFs are not generating growth in black communities

“Eighty-five percent of West Lawndale is in a TIF,” Tresser said.

He has organized a petition drive to get people to voice their opinion about the development tool, being used on multiple fronts to develop parcels. More than 260 people had signed the petition at https://actionnetwork.org/petitions/shut-down-racist-tif-slush-funds as of Nov. 22.