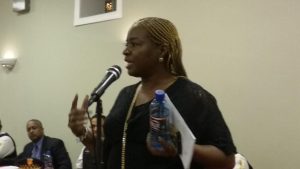 A representative of BUILD, which stands for Broader Urban Involvement & Leadership Development, an organization specializing in gang intervention and prevention, and youth programs, talks to Austin community members about the need to “get back to community.” (Chronicle photo by Kevin Beese)

Aisha Oliver, a resident of Chicago’s Austin neighborhood, says that people in Austin and other troubled areas can’t expect law enforcement and elected officials to wipe their problems away.

“We know the answers all the time. We know gun violence. We live it,” Oliver said. “We know the school funding issues. We know we are in a food desert. People are complaining that the cops aren’t acting.”

She said people have to take to the streets, interact with youth, mentor them, and show them a better way than violence.

“No one is out talking to youth personally,” said Oliver, who also works in Austin with BUILD, a youth development organization. “We need to be on the streets talking, holding youth accountable.”

State Rep. Camille Lilly (D-Chicago) said the proliferation of guns on city streets is part of the problem with ongoing violence.

“We are trying to make sure the laws are stronger so we are getting the guns,” Lilly said,

The state representative said putting restrictions on gun sales and requiring serial numbers on bullets are two of the proactive steps lawmakers are pushing to stem gun violence.

Cmdr. Dwayne Betts of Chicago’s 15th Police District, which is headquartered in the Austin neighborhood, said although the past few months have seen a drop in the number of shootings, violence continues to be an issue.

Betts said an exchange he had with a woman at a recent community meeting demonstrates part of the problem plaguing the area. At the meeting he told parents to feel free to search their child’s room for drugs or weapons. The woman responded that she didn’t think such a move was safe.

“It ain’t safe outside because it’s not safe inside,” Betts said.

A representative of Youth Outreach Services, who did not identify herself at the meeting, agreed, saying parents need to question their child when he or she walks in the house wearing new clothes.

“If you didn’t buy the clothes for them, the money came from somewhere,” the YOS staffer said.

She said parents have a right to check under mattresses and in drawers.

“Tell your children, ‘Everything in your drawers, I paid for.’”